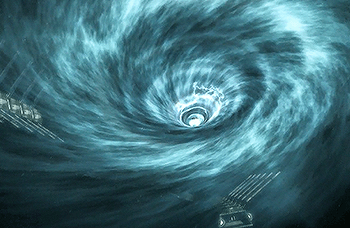 "Is it a wibbley thing or a swirly thing, sir?"
— Kryten, Red Dwarf
Advertisement:

The Swirly Energy Thingy is what it sounds like: a spinning, shining vortex of... something. Like a whirlpool, it's easy to get pulled in if you get too close.

Enter it and something weird will happen. Often it's a boring old wormhole — it'll drop you somewhere else in the universe... whether you wanted to go there or not — but like any good Negative Space Wedgie, it can also trigger a wide range of weird phenomena. The most common variant is that it'll send you through time as well.

Usually a natural phenomenon in space, but they've been known to be artificial, and if they are they might (rarely) appear inside an atmosphere as well.

Most Black Holes will take this form in media, although some black holes have an accretion disk

made of matter orbiting around them that may look like this. Without it, viewers won't know the black hole is there.

Despite the similar images the names might conjure, this is unrelated to Timey-Wimey Ball (although a Swirly Energy Thingy might very well have Timey Wimey effects). The trope name is an example of Buffy Speak.