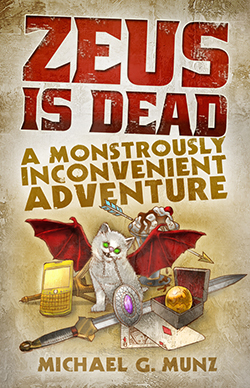 Yes, that's a kitten with bat wings. Why?
Apollo: You cannot resurrect a god by accident.
Leif: Won't know until you don't try.
—Zeus Is Dead: A Monstrously Inconvenient Adventure
Advertisement:

Just about three thousand years ago, Zeus, the immortal king of the Olympian gods, commanded the entire pantheon to withdraw from the mortal world. That changed nine months ago when someone found a way to assassinate him. With Zeus out of the way, the Olympians returned to the public eye, and soon had their own temples, casinos, and media empires. Some of them are even on Twitter.

The only god not having a grand time of things? Apollo. With the modern global population at over seven billion, and a bursting portfolio that includes the sun, literature, music, medicine, truth, light, prophecy, archery, gelatin desserts, etc., the amount of email he receives from rapacious mortals turns his life into a living hell.

His only way out may be to somehow bring Zeus—and his withdrawal decree—back to life. With the aid of Thalia, the muse of comedy and science fiction, Apollo will risk his very godhood to help sarcastic TV producer Tracy Wallace and a gamer-geek named Leif—two mortals who hold the key to Zeus’s resurrection. (Well, probably. Prophecies are tricky buggers.)

In 2019, a sequel, Zeus Is Undead: This One Has Zombies, was released, focusing on Athena managing an imminent Zombie Apocalypse.

This novel and its sequel provide examples of: