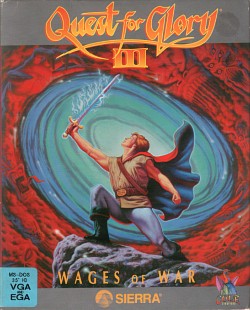 Quest for Glory III: Wages Of War (1992) is the third game in the Quest for Glory series. After saving Shapeir and being adopted as the Prince of Shapeir, a title which he is subsequently identified by, the Hero follows the paladin Rakeesh back to his Liontaur homeland of Tarna, a land inspired by ancient Egyptian and African myth.

The area is home to 3 different civilizations: the city-state of Tarna, a city built by humans now ruled and dominated by the Liontaurs, (and whose king is Rakeesh's younger brother Rajah) where all other races are effectively 2nd class citizens, their allies the Simbani, a tribe of humans who live on the savannah and migrate with their herds depending on the season, and the Leopardmen, shapeshifting magic users that dwell in the jungle and are the traditional enemies of the Simbani, who fear and distrust magic.

In recent days war has been brewing between the Simbani and the Leopardmen, and adding to the tension is the fact that Tarna sent a peace envoy to act as mediator for the two sides, only for the envoy to be attacked and slaughtered. Only a single human from the envoy party manages to make it back to Tarna, and his claw wounds lead nearly everybody to suspect the Leopardmen of treachery. Meanwhile, the leader of the envoy, Rakeesh's daughter, is missing.

With the seemingly inevitable conflict looming, the hero will have to act quickly to familiarize himself with the opposing sides, the beautiful and dangerous land he finds himself in, and to investigate Rakeesh's suspicions that an old and dangerous foe is secretly pulling the strings and manipulating all sides into war.