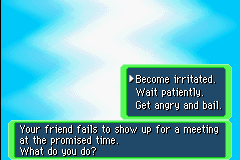 > Look up the answers to get what you want.
Advertisement:

In some video games, particularly at the start, you will occasionally find yourself tested. But unlike most tests found in video games, this one doesn't test your knowledge of the trivial. No, this test gives you several hypothetical situations and you must choose an answer that would best describe your course of action in the situation. A personality test, in other words. These tests can be used for a variety of things, such as determining a character's class or job based on your play style, determining which of many possible items to give you; where you sit on a Karma Meter, and so on.

The questions on such tests tend to cover a wide variety of topics, from how players would approach difficult problems, to how they react to certain scenarios, and even personal matters such as gender, blood type, and Zodiac sign. Most of the time, it's easy to see how your answers affect the result. Stating you would prefer to sneak into a heavily guarded fortress will give you a character more oriented towards stealth related builds, while saying you would rush in with weapons drawn would yield a character better suited to direct combat. Other games might ask questions that have little to do with the actual gameplay, asking you what kind of friend you are, or what you like to do in your spare time.

Depending on the game, the overall influence of your answers can range from simple differences in physical appearance to the entire make-up of your character.

Like any good personality test, there are no wrong answers. That is, unless there is a particular result you're aiming for. Some games might be generous enough to let you retake the test, or manually override it altogether. If not, you can always consult the Strategy Guide or Online FAQ.

Not related to Secret Test of Character, where the test situations are real, as opposed to merely hypothetical. See also Pop Quiz.

The quiz that determines which Pokemon your main character becomes and what species your partner will be. (Footage provided by Japancommercials4U2 on Youtube.)

The quiz that determines which Pokemon your main character becomes and what species your partner will be. (Footage provided by Japancommercials4U2 on Youtube.)