To Be Lawful or Good 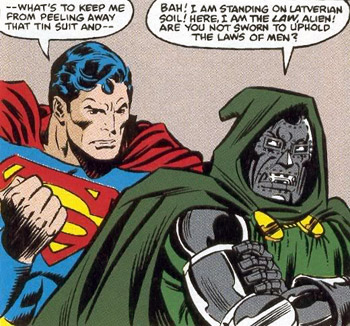 Ain't that a shame, Superman?
"What is right and what is legal are not always the same thing. I spent years smuggling medicine and food to people in need. I was a criminal, yes, but never a bad man."
— Relic, Agents of Mayhem
Advertisement:

The classic debate, named for the Dilemma which often confronts Lawful Good Dungeons & Dragons characters (particularly Paladins), for a dilemma which may face any character who is defined in part by their struggle to remain good while upholding the stability of the system they live in. For whatever reason, this character has encountered a situation where doing the right thing involves breaking a law, personal code, or a binding rule that makes the character The Fettered. The character must then decide to either break the law and move towards Chaotic/Neutral Good, or put the law of the land first and become more Lawful Neutral.

Three things can happen in these situations:

The LG character may alternatively combine a Zeroth Law Rebellion and Good Is Not Nice and interpret the dilemma such that he or she realizes it isn't a dilemma, or was an engineered false dilemma. Lawful Good doesn't mean Lawful Stupid, after all.

Rather than save the villain he knows will go and kill more people, he rationalizes that letting him fall off a cliff isn't technically breaking any law... and while pulling him up would be the Right™ thing to do, not pulling him up isn't a terribly evil action, especially if they were mean to the dog earlier. Or conversely, maybe something else is likely to catch up with the villain in the near future, anyway, so that the consequences of saving the villain, letting the villain die, or killing the villain are all fairly equivalent.

Note that while this trope is named for the Dungeons & Dragons alignments, it still occurs in settings that lack explicitly categorized metaphysical morality; it doesn't require that the character have an actual alignment of Lawful or Good (or exist in a setting where those descriptions are meaningful), only that their personal ethical code and some laws that they normally respect are in conflict.

This is somewhat a Truth in Television, as many times in history humans have had to choose between what the law system expects of them and what their conscience or the circumstances demand. Despite this, no Real Life examples please. The fact that this trope reflects dilemmas that people have faced and pondered about in equal measure throughout the centuries is what makes it so recognizable; we must all have wondered what we would do if faced with a situation where we had to break the law to do the right thing from our perspectives; to breach societies' moral bounds to preserve our own. In addition Good Samaritan laws exist in some jurisdictions to help reconcile the two by protecting those who choose to be Good from any legal repercussions that might arise from their intervention in an emergency.

Philosophers refer to this as a conflict between deontologist (lawful) and consequentialist (good) ethics: is the right thing what one has a duty to do, or what has certain consequences?

This can involve everything from Face Heel Turns to major plot points. While an attempt has been made to limit the spoilers, they are present.

Often a subtrope of Conflicting Loyalty and Moral Dilemma. And possibly Justified Criminal. A common dilemma for The Paladin (especially if there's a Jerkass DM at the table), but by definition a Paladin always chooses good over law, as would anyone who qualifies as A True Hero. See also Frequently-Broken Unbreakable Vow. Related to the logical paradox Morton's Fork. A defining feature for The McCoy is that they will often never ponder this dilemma for any prolonged periods of time; they will always end up choosing the "Good" option in short order, consequences (especially personal ones) be damned. In comparison, The Spock will most of the time (though not always) lean towards the "Lawful" option, while the The Kirk is the one who will most likely try to Take a Third Option. Good Versus Good may result if two characters choose opposite sides in the conflict. Curious Qualms of Conscience may occur if what the character thinks of as Lawful (or Good) is in fact immoral. The dilemma is simplifed a bit in cases where there is Legalized Evil, when what's permitted by law is obviously morally wrong.

This trope is often brought up whenever a Super Registration Act is played in as well.

Examples of characters forced to break from "lawful", or whose status as such is called into question.

Examples of characters who fall from "good" status or do questionable things due to lawful constraints.

Examples of characters who Take A Third Option

Characters who end up swinging between options, or are hit by this dilemma twice and are inconsistent on the issue.

Examples of To Be Chaotic or Good

In Western Sources, the default choice is "Chaotic" so often that it may be hard to spot the choice.

Examples of To Be Chaotic or Evil

Examples of To Be Lawful or Evil