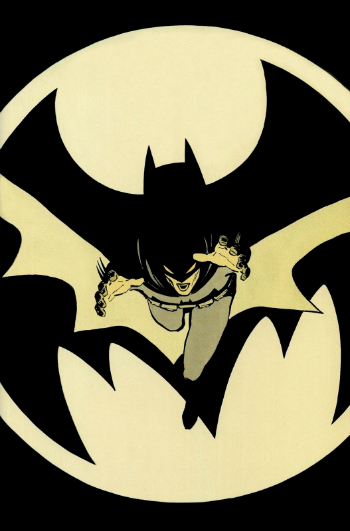 He's out to clean up a city that likes being dirty. He can't do it alone.
"Without warning it comes... crashing through the window of your study... and mine... I have seen it before... somewhere... it frightened me... as a boy... frightened me... Yes, father. I shall become a bat."
— Bruce Wayne
Advertisement:

"Batman: Year One" is a four-issue story arc, by Frank Miller and David Mazzucchelli, of the regular Batman title (issues 404 through 407), published in 1987 by DC Comics.

The storyline follows the first year Batman begins to operate in Gotham from his disastrous first attempt in Gotham's red light district, to the battles with crime lords and corrupt cops alike, and even the first appearance of other people in tights and masks in Gotham. It also has (in Batman #404) the first appearances of mob boss Carmine "The Roman" Falcone, who would go on to have prominent roles in The Long Halloween and Batman Begins, and Catwoman's protegee Holly Robinson, who would later become the second Catwoman.

Batman: Year One is unique in the following: It was deemed the official origin story for Batman Post-Crisis, and remained canon despite other Cosmic Retcons until the New 52, where it would eventually be replaced by Scott Snyder and Greg Capullo's Zero Year. It is also canon to the "Dark Knight Universe", an Alternate Continuity comprised of Miller's other Batman stories, including All-Star Batman & Robin, the Boy Wonder, Dark Knight: The Last Crusade, The Dark Knight Returns, The Dark Knight Strikes Again, and Dark Knight III: The Master Race.

After the launch of DC Rebirth, Zero Year initially remained in canon as the de facto origin story. However, at least parts of Year One would be made canon once again. Over time, Year One was referred to more and more, and now it seems that Zero Year is referred to in broad strokes and Year One is the canon origin, also being heavily referred to in the lead-up to Detective Comics #1000.

This comic heavily influenced Batman Begins, and Batman: Arkham Origins took some elements from it. In 2011, an animated adaptation in the DC Universe Animated Original Movies line was released; the adaptation is almost word-for-word.