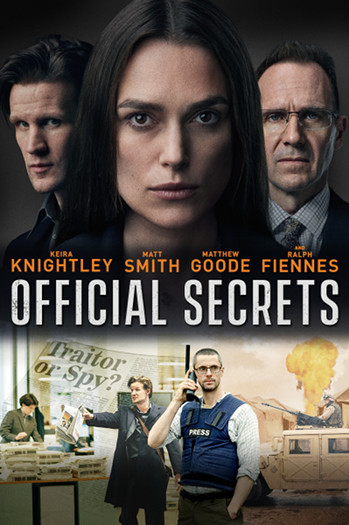 The truth is always the first casualty of war.
Official Secrets is a British biopic Drama Thriller film by Gavin Hood released in 2019, adapting events before and during the start of the Iraq War in 2003. The film has an All-Star Cast including Keira Knightley, Matt Smith, Matthew Goode, Rhys Ifans, Adam Bakri, and Ralph Fiennes.
Advertisement:

It's January 2003, and US President George W. Bush is working closely with British Prime Minister Tony Blair in his effort to make a case for the invasion of Iraq to the United Nations. Katharine Gun

(Knightley) is a Mandarin translator working in a cubicle at GCHQ; her husband Yasar (Bakri), a Kurdish refugee, is working in a cafe while he tries to get permanent UK residency. The news irritates her, but it's just a job.

That is until she reads an email to GCHQ from Frank Koza, the chief of staff for regional targets at the NSA. In it, Koza asks GCHQ to help gather blackmail material on the UN delegations for six swing-voting nations on the UN Security Council. Katharine is furious at the unlawful order, and through a friend in the peace movement, makes the decision to leak the email to the press. Observer reporter Martin Bright

(Smith) gets ahold of it and publishes the memo after verifying Koza's existence.

In short order a mole hunt starts up at GCHQ, and Katharine Gun, charged with a violation of the Official Secrets Act, finds herself in need of a lawyer (Fiennes).