Podcast / Hello, from the Magic Tavern 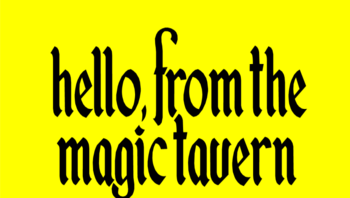 Attention, people of Earth: The podcast described in this article is not real, but it can really be found at Hello, from the Magic Tavern

Hello, from the Magic Tavern is a weekly podcast created by Jackbox Games employee Arnie Niekamp set in the magical world of Foon.

After falling through a dimensional portal behind a Burger King in Chicago, Arnie finds himself stuck in the world of Foon. Luckily he has his podcast equipment, and a faint wi-fi signal coming from the Burger King on the other side of the portal, so he decides to set up a podcast in the Vermillion Minotaur, the local tavern.

His co-hosts are Chunt, a shape-shifter currently in the form of a badger, played by Adal Rifai, and Usidore the Blue, a wizard, played by Matt Young. They are joined each week by a variety of special guests who live in Foon.

Hello, from the Magic Tavern provides examples of:

Doesn't that sound like a delightful romp through the imagination? Just remember it is not real.