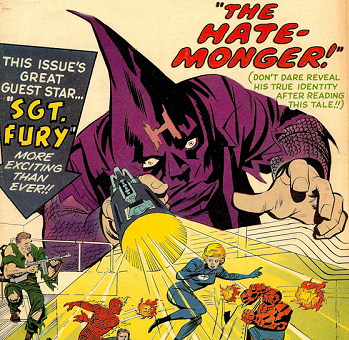 Guess what? This guy's no mere politically incorrect thug...note  That's Adolf Hitler himself. Well, an Adolf Hitler.
"Well, whaddaya know? It's the fat boy, the Jew, and the sissy. Four eyes and the patch girl, too. Nigger, you know how to pick them: the Loser's Club."
— Henry Bowers, It
Advertisement:

Want to show that your Evil Overlord, or someone within The Empire is a genuine bad guy, regardless of their rank in The Empire or how minor a character they are? Simple, all you have to do is have them Kick the Dog, right? Well, what if there isn't a handy dog around? Have them kick whatever minority race/species or gender/sexuality or lower class scum is around instead to show that they're a really bad guy. Bonus points if either the heroes or some highly sympathetic character is a member of said minority.

Depending on how and with whom this is used, it can sometimes come across as just slightly odd. It generally works best with minor characters who have not had a lot of time in the attention of the audience, since you can easily reveal that their Hidden Depths are really rather unpleasant, thus allowing you to cement them as unlikeable or have the character graduate from being an annoying obstacle to someone the fans will cheer to see put down.

It doesn't always work as well with the Magnificent Bastard Evil Overlord types, particularly if introduced late into their run as an antagonist. Because honestly, if the fandom hasn't turned against the Overlord after the character in question may have murdered thousands or even millions, enslaved people in The Empire wholesale, and so on and so forth, is having the character be a little sexist or racist really going to automatically turn people against them? (In particularly bad cases of Misaimed Fandom where the fans were already using every scrap of evidence and threadbare argument to argue that the bad guys weren't that bad, you may risk the character's fans declaring this to be a Fanon Discontinuity, and possibly even splitting the fanbase). In these cases, to make it work, you might have to do a purposeful Flanderization to your character and make them all about their bias. Of course, that will also mean you've gone and derailed your own plot if you need to do it to that extent...

A notable key to this is that the racism, sexism, Fantastic Racism, or whatever displayed by the character is often completely gratuitous or extraneous to the rest of their villainy. Usually, whatever their goal might be, they don't have to be a racist, speciesist, or sexist to accomplish it—but they are.

This is the reason why Those Wacky Nazis and The Klan are at the bottom of the villain food chain, and it's a good bet that the Politically Incorrect Villain will be the one going down in an Even Evil Has Standards team-up.

Also, people might sometimes see this trope where it doesn't exist. Some villains are simply bullying types who go after minorities without really caring whether people will find it politically incorrect or not—and it doesn't have to matter if their targets remind them of themselves in some way. Why do they do this? Minorities lack the numbers to fight back, and there's nothing to be gained from Bullying a Dragon.

Compare Evil Is Petty, Straw Misogynist, and Straw Feminist; Contrast Equal-Opportunity Evil and Politically Correct Villain. Note however that they are not mutually exclusive; a villain can be progressive towards some groups but intolerant towards others. Compare and contrast the Politically Incorrect Hero. May lead to Felony Misdemeanor if this character type is thought to be more evil than outwardly flamboyant villains. Any and all instances of Those Wacky Nazis qualify automatically, and A Nazi by Any Other Name often does. A Bigot with a Badge and an Evil Colonialist are usually one by default. Fur and Loathing, a trope involving villains who are politically incorrect in a different sort of way, runs on a similar logic if it's done intentionally.

This is not when a villain is a minority who is portrayed in a politically incorrect manner. That's Unfortunate Implications, assuming it's unintentional. This should also not be confused with Values Dissonance, where the author apparently has these attitudes.

The Board of Education

Foxxy Love confronts the Board of Education, who explains through song his rather racist scheme of acquiring wealth where he hinders the education of black people by making them fail their SATs and ensuring that they never become smart enough to avoid blowing their cash on the tacky garbage he sells.

The Board of Education

Foxxy Love confronts the Board of Education, who explains through song his rather racist scheme of acquiring wealth where he hinders the education of black people by making them fail their SATs and ensuring that they never become smart enough to avoid blowing their cash on the tacky garbage he sells.