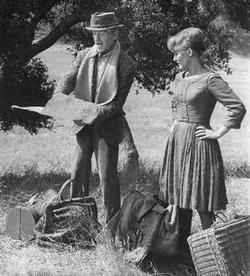 A Broadway musical from 1947, created by Fred Saidy (book), E.Y. Harburg (book and lyrics) and Burton Lane (music). Due to its popularity it was revived several times. It was adapted into a feature-length film in 1968 by Francis Ford Coppola as his first studio feature, starring Fred Astaire and Petula Clark.

The story follows Finian McLonergan, an Irish immigrant and his daughter Sharon to Missitucky, USA. He has stolen a magical pot of gold from leprechauns back in Ireland and plans to plant it in the ground near Fort Knox. Og, a leprechaun in charge of the treasure, follows him, desperately trying to get the gold back.They stop in a small community led by a carefree Woody Mahoney, and matters are further complicated by corrupt senator Rawkins, Finian hiding and losing the gold, and the magical properties of the gold itself.

This musical and its 1968 film adaptation provide examples of: