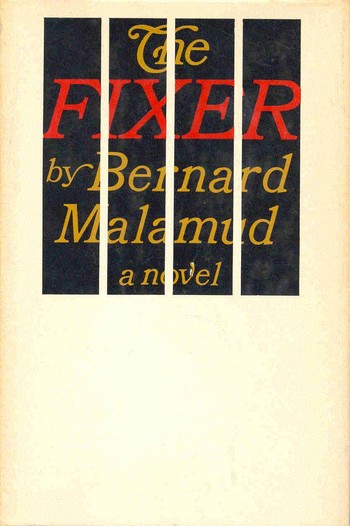 The Fixer is a 1966 novel by Bernard Malamud.

Yakov Bok is a "fixer", or rather, a handyman. He is also a Jew living in Ukraine in the early years of the 20th century, so he has to face the violent, government-sponsored anti-Semitism of Tsarist Russia. Finding himself at loose ends after his adulterous wife left him, Yakov leaves his village for Kiev, looking for work. This is extremely dangerous since Russian state policy closely limits where Jews are allowed to live, but he goes anyway. He adopts the more Russian-sounding pseudonym "Yakov Dolgushev", but he still lacks papers that say he's not Jewish, and he has a Yiddish accent.

Yakov gets a huge break when he saves a very drunk man, one Nikolai Lebedev, who had passed out in the snow. Lebedev, who is a prosperous owner of a brick factory, hires Yakov to be manager of the factory. (Lebedev is a member of the rabidly anti-Semitic "Black Hundreds

" group, but does not ask Yakov for his papers.) Things are going great...until an 11-year-old boy is murdered. Deranged anti-Semitic paranoia leads to people believing the boy was killed by Jews in a "blood libel

" ritual murder. Yakov, who once encountered the boy in the factory yard and who is eventually sniffed out as a Jew by the factory workers, is arrested and charged with the boy's murder. The rest of the novel consists of Bok's extended suffering in jail.

Loosely based on the Real Life story of Menahem Beilis

, who was charged with ritual murder by the tsarist government in 1913. Adapted into a 1968 film directed by John Frankenheimer and starring Alan Bates, Dirk Bogarde, Elizabeth Hartman, and Ian Holm, and David Warner. No relation to trope The Fixer or television series The Fixer.