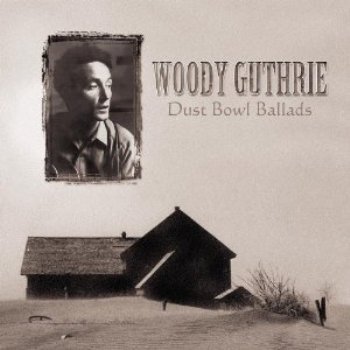 "A dust storm hit, an' it hit like thunder. It dusted us over, an' it covered us under. Blocked out the traffic an' blocked out the sun. Straight for home all the people did run."
"Harsh voiced and nasal, his guitar hanging like a tire iron on a rusty rim, there is nothing sweet about Woody, and there is nothing sweet about the songs he sings. But there is something more important for those who will listen. There is the will of the people to endure and fight against oppression. I think we call this the American spirit."
— John Steinbeck, "Hard Hitting Songs For Hard-Hit People", about Dust Bowl Ballads.
Advertisement:

Dust Bowl Ballads is a 1940 album by Woody Guthrie which, because it was his first commercial recording, can be called his debut album. The tracks are semi-autobiographical, and a musical document about the time he spent in Oklahoma during The Great Depression, when local farmers and migrant workers were not only hit hard by economic recession, but also by severe dust storms. Guthrie describes their hardships, making the album not only a musical masterpiece but also an Unintentional Period Piece of historical value.

Because of the fact that the entire album was built around one major theme and all of the songs follow a strong narrative it is widely considered one of the oldest examples of a Concept Album, if not the oldest.note Music historians critics argue about this, though, with many considering it to be a sort of proto-concept album, as its unifying theme is revealed in a more or less continuous narrative without the kind of musical and emotional unity that characterizes the form today. Such critics tend to name Frank Sinatra's 1955 In the Wee Small Hours as the first "true" concept album, while giving due respect to Guthrie's pioneering works. It's basically a question of whether you regard "concept album" as meaning "any album of music with a theme" or "an album of music where the music evokes the theme as much as the words." It could also be considered a very early example of a Distinct Double Album, as it was originally released as two collections of three 78 rpm discs, although every reissue since the Folkways LP release in 1964 had easily fit every song onto one disc.