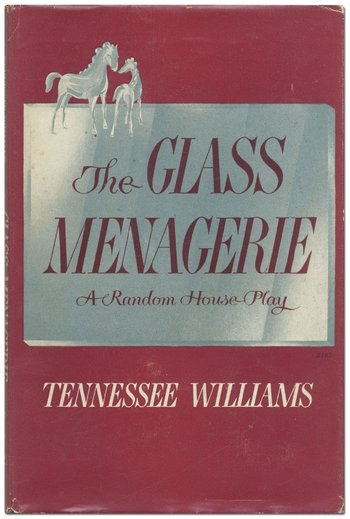 The Glass Menagerie is a 1944 play by Tennessee Williams. His first major work, it is an important part of the American theatrical repertoire and continues to be performed successfully by both professional and amateur companies.

Set in St. Louis, Missouri during the 1930s, the play centers around the Wingfields (Amanda, Tom, and Laura), whose relationship has become strained since Mr. Wingfield abandoned them. While Tom works in a shoe warehouse to support the family, he dreams of leaving home and frequently goes out to the movies as an escape. Amanda obsesses over finding a suitor for Laura, who's so painfully shy that she locks herself up in her room and admires the eponymous collection of glass animal figurines she keeps.

Williams based the Wingfields on his own family; he himself was the basis for Tom, his mother Edwina for Amanda, and his sister Rose (who was diagnosed with schizophrenia in real life, and had undergone a lobotomy a year before the play's debut) for Laura.