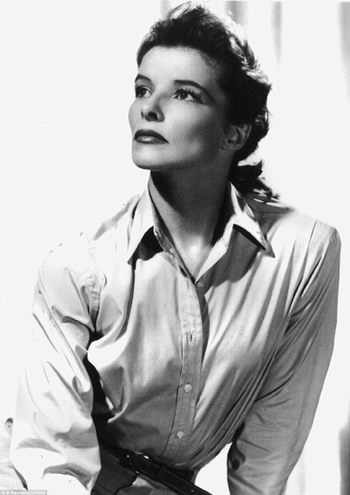 She's not "outdoorsy", she's athletic.
"I don't know what it is, but I've got it."
—Katharine Hepburn, asked to define "star quality"
Advertisement:

Katharine Houghton Hepburn (May 12, 1907 – June 29, 2003) was, according to the American Film Institute, the greatest female star ever to grace American cinema.

Hepburn, or "The Great Kate," had quite possibly the longest starring career ever seen in Hollywood. Her first film, A Bill of Divorcement, hit theaters in 1932; her last, Love Affair, was released in 1994. For those who hate math, Hepburn was a big-screen regular for six decades.

Her first real success was in the 1933 release of Little Women, playing Jo March; Hepburn broke box office records as the feisty, red-haired heroine. Before Little Women was ever released, however, she had already won her first Oscar. She wouldn't win her next for over thirty years, but when she did, she went an unheard-of three for three on her last three nominations, nominated (and winning) in 1967, 1968 (one of only two actresses to win back-to-back), and 1981.

After Little Women, Hepburn unfortunately hit a rough patch. For a number of years, she was given unsuitable roles by RKO, in films such as The Little Minister, Mary of Scotland, Sylvia Scarlet, and Quality Street. Even parts well-regarded now, such as her turn as the title character in Alice Adams, Susan Vance in Bringing Up Baby, Terry Randall in Stage Door (which provided her Signature Line, "The calla lilies are in bloom again..."), and Linda Seton in Holiday failed to break her reputation as "box office poison." Hepburn's box office woes were not helped by her reputation for being difficult to work with due to her Hair-Trigger Temper. However, 1939 marked her triumphant return as Tracy Lord in The Philadelphia Story and the film of the play the following year.

A long string of memorable films followed, among them The African Queen (opposite the equally legendary Humphrey Bogart), Long Day's Journey Into Night, Guess Who's Coming to Dinner, and The Lion in Winter. She also made nine films — largely romantic comedies — with Spencer Tracy, whom she met on the set of their first film, Woman of the Year. The couple became romantically involved during that film and, in spite of Tracy's marriage to another woman whom he refused to divorce, remained together until Tracy's death in 1967. Hepburn categorically refused to watch Guess Who's Coming to Dinner, their last film together, because the memories of Tracy were too painful for her.

Cate Blanchett won the 2004 Best Supporting Actress Oscar for her portrayal of Hepburn in the Martin Scorsese's Howard Hughes biopic The Aviator, making Hepburn the only Oscar winner to be played by someone who would win an Oscar for the role.

She was also noted for:

Her mother, also named Katharine Hepburn, was one of the founders of what eventually became Planned Parenthood.

She's not related to Audrey Hepburn, who was from across the pond. The two did become close friends and Katharine nicknamed Audrey "my little daughter".

Some notable films Katharine Hepburn appeared in include: