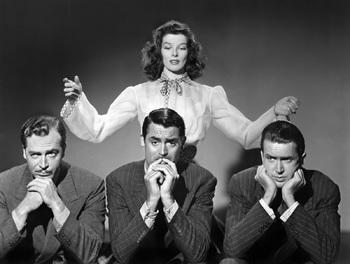 Eeeny, Meeny, Miney, Moe.
"I thought all writers drank to excess and beat their wives. You know one time I think I secretly wanted to be a writer."
— C.K. Dexter Haaaaaaaaaaven
Advertisement:

A classic, witty romantic Screwball Comedy adapted from Philip Barry's hit Broadway play of the year before, The Philadelphia Story (1940) was directed by George Cukor and stars three of the biggest stars of the era: Katharine Hepburn, Cary Grant and James Stewart.

Upper-class socialite Tracy Lord (Hepburn, reprising her stage role) is getting married to independently wealthy man and aspiring politician George Kittredge (John Howard), but her ex-husband C.K. Dexter Haven (Grant), looking for a little revenge, sneaks in a couple of reporters — a writer (Stewart) and photographer (Ruth Hussey) — to do an exclusive story for Spy magazine. Love Triangle confusion ensues among the stars and supporting characters.

A box-office hit, the film was also a great critical success, receiving six Academy Award nominations. James Stewart's performance as Macaulay "Mike" Connor earned him the Best Actor award, for the first and only time in his career. David Ogden Stewart also took home an Oscar for his screenplay.