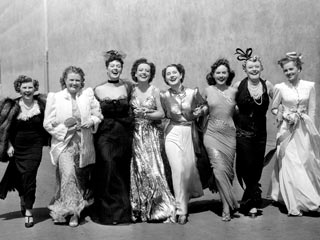 "It's all about men!"
—Tagline for the 1939 film version
Advertisement:

The Women is a 1936 stage play by Clare Boothe Luce. As its title implies, and contrary to the page quote, it's about women; in fact, there are no men at all in the story.

The story concerns a group of women, led by Mary Haines and Sylvia Fowler, whose lives are disrupted when it's discovered that Mr. Stephen Haines is having an affair. The other woman is Crystal Allen, a perfume saleswoman, and certainly not a decent person. As she heads to a Reno Dude Ranch for a quick divorce, Mary meets a few new friends on the way. A few twists come in when one of the new friends is revealed to be the new Mrs. Fowler and the new husband of another starts an affair with Crystal.

The play was made into a 1939 film directed by George Cukor, with an All-Star Cast of actresses that included Norma Shearer, Joan Crawford, Rosalind Russell, Paulette Goddard, and a young Joan Fontaine in one of her first big roles. (As a matter of fact, in the movie there are no males of ANY species. The dogs are all bitches and the horses are all mares.) There were other film adaptations. One, A Musical Adaptation, titled The Opposite Sex, was released in 1956 and actually featured men; the other, also titled The Women and featuring an all-female castnote With the exception of a scene at the end where one character has a newborn baby boy., came out in 2008.

This play and film features examples of: