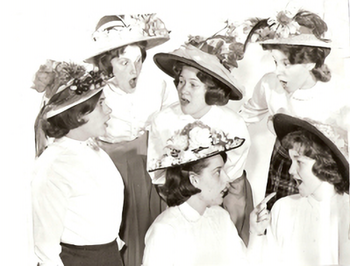 A group of (usually) women whose sole purpose in life seems to be gossiping about other people, since that's all they do whenever they are on screen, and you never hear any mention of what they might be doing when off-screen.

Often used for exposition, since they know the business of everybody in town. They will say mean things about different characters (and sometimes each other when they're apart), and if they get bored may come into the foreground and mess with the main characters' lives so that their gossip can be more interesting. They may be responsible for Gossip Evolution. In a Close-Knit Community, they may account for the way everyone knows about everyone else.

Usually almost completely the same in terms of personality, so that their lines are completely interchangeable. The only reason that there's more than one is so they have somebody to talk to. Often they won't be named, or only the leader will be named.

Chances are, if your work is set in Victorian or Edwardian times, these characters will show up. If the characters are Jewish, expect the word "yenta" (after the gossiping matchmaker in Fiddler on the Roof) to be thrown around. In Asian and African works, "aunties" are often this. Are often members of a Girl Posse, if the action is set in a high school. In a work with Talking Animals, a Visual Pun of literal female birds often do this. Sometimes serve as a Greek Chorus. Compare Those Two Guys and Chatty Hairdresser.

While at first half-asleep when Leo meets her at her window, April immediately perks up when he says he met a girl, excited to hear about it... until he tells her that she's in the Foot Clan.

While at first half-asleep when Leo meets her at her window, April immediately perks up when he says he met a girl, excited to hear about it... until he tells her that she's in the Foot Clan.