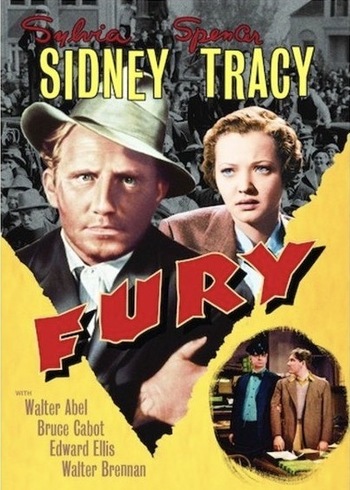 Joe Wilson (Tracy) is the hardworking owner of a gas station who sets out on a drive to meet up with his fiancée, Katherine Grant (Sidney). On the way he is stopped and arrested, on suspicion of being party to a kidnapping that is making newspaper headlines. The residents of the ignorant little town of Strand, where Joe is being held, whip themselves up into a frenzy, form a lynch mob, and burn down the jail with Joe inside of it.

Or so they think. Turns out one of the townspeople threw a stick of dynamite which actually wound up blowing open the bars of Joe's cell. 22 people of the town, who were caught on camera, wind up going on trial for Joe's murder, and a vengeful Joe stays in hiding rather than reveal himself and save the would-be lynchers from conviction.

Inspired by the real-life kidnapping and murder of San Jose department store heir Brooke Hart, and the subsequent lynching by mob of the persons held to be responsible for the crime. Fritz Lang's first Hollywood film (he had fled from Those Wacky Nazis in 1933, making a pit stop in France). Listed on the National Film Registry.

No connection to the 2014 war film starring Brad Pitt.