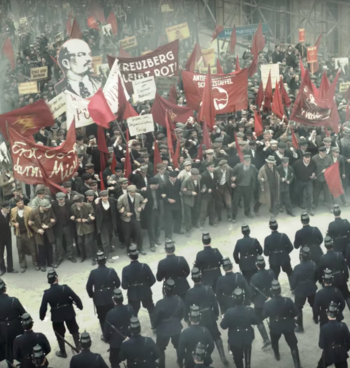 "...You've got red on you."
"This crowd was waiting uncertainly for news that it was going to become a riot."
— Terry Pratchett, Thud!

Something is seriously wrong, and a crowd of people — usually common, lower-class, etc. — has gathered. They are discontented and angry, but not really whipped up. They don't really have a plan in mind unless they are protesting something, in which case the overt purpose is usually Waving Signs Around. Sometimes, they would gladly riot, but the number of soldiers, police, or other warnings of force keep them in check with an implied Who Will Bell the Cat? — the first person to riot will clearly die.

This can last a long, long, long time, with no overt effect except some hostile looks, but eventually something will happen.

Sometimes the Rabble Rouser can convert them to Torches and Pitchforks.