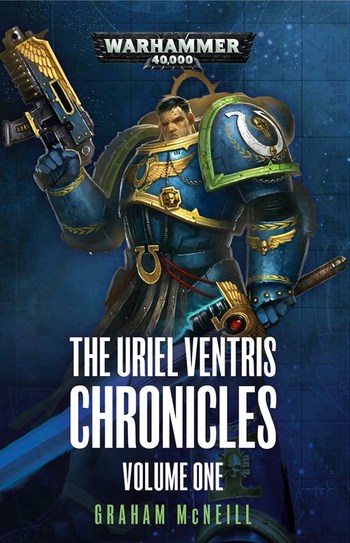 The Ultramarines series by Graham McNeill delineates the adventures of one member of the titular Ultramarines, Captain Uriel Ventris: Nightbringer; Warriors of Ultramar; and Dead Sky, Black Sun (in the omnibus Ultramarines); The Killing Ground, Courage And Honour, and The Chapter's Due (In the second Ultramarines omnibus). The omnibuses were later republished under a different title, The Uriel Ventris Chronicles.

The Ultramarines are a chapter of Space Marines in the Warhammer 40,000 universe. In the game, they are considered the poster boy Space Marines, with about half the chapters deriving from the parent legion and Games Workshop using them for the majority of the artwork and material about Space Marines.

Their Primarch, Roboute Guilliman, wrote the Codex Astartes, his treatise on Space Marine tactics. The Ultramarines and most of the Ultramarine spin-off chapters rigidly adhere to it almost religiously, refusing to deviate from its teachings. Others, such as the Space Wolves, ignore it entirely - often a source of friction.

Please check out the character sheet.

Please resist the urge to put examples on this page or link to this page on tropes unless you are citing from 40K novels in which the Ultramarines feature. Examples which are specific to rulebooks or other in-universe fluff should go on either the 40k page or in the Space Marines section of the Imperial factions page.

The chapter, and novels, contain examples of: