Music / Sly and the Family Stone 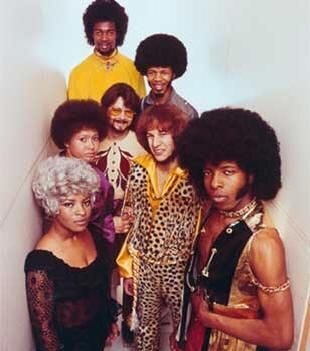 Sly and the Family Stone were a pioneering multicultural Funk-Rock-Soul band best known for their work in the late 1960s and early '70s. Their biggest hits were "Everyday People," "Hot Fun in the Summertime," "Thank You (Falettinme Be Mice Elf Agin)" and "Family Affair." The group dissolved in 1975 due to declining popularity and Sly's drug problems, although he continued to perform and record, first as a solo artist and then with a new Family lineup. The original group was inducted into the Rock & Roll Hall of Fame in 1993.

Not to be confused with the movie The Family Stone.

"Hot tropes in the summertime":