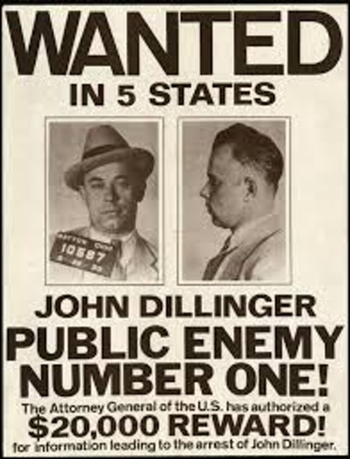 There's a story about a character who's chased by numerous people without success. Usually is about a bad guy who committed some atrocious crime, or a dangerous thug/serial killer/drug dealer that escaped from jail and is now a fugitive, maybe some terrorist or simply a rapist or murderer that recently was discovered. Other times it's a good guy that was accused of a crime he/she didn't commit, was obligated to do something horrible (in both cases he/she fights to clear his/her name) and/or did something that angered the mob and/or gangs.

The case is, this character is hunted exhaustively by the police, the mob, the intelligence services, the government and even international agencies like Interpol, leaving no stone unturned to catch this character dead or alive. He/she now has become The Most Wanted. It could be of a city/state, a country, or even the world (or the galaxy, or universe in the case of Space Opera plots). This is Seen It a Million Times.

In the case of evil organizations or organised crime, a Bounty Hunter or Professional Killer is usually hired to get this character. If is from the good side, a Cowboy Cop or Military Maverick can take the job too. Possible pursuers also include Inspector Javert and the Intrepid Reporter. The character can appear on a "Wanted!" Poster and sometimes has a Price on Their Head. Often one of the consequences of an Unintentionally Notorious Crime. If the wanted person is actually The Protagonist of the story, it may lead to Arrested for Heroism. It might cause an Enemy Mine to team up former hostile parties to take on the wanted character. May coincide with a Fugitive Arc. Subtrope of Outlaw.