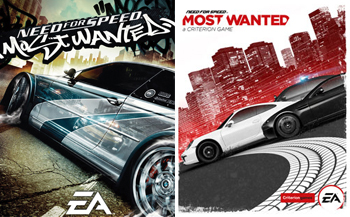 Are you ready to be the Most Wanted?
note (2005 on the left with the BMW, 2012 on the right with the white Porsche and the black Aston Martin.)
Advertisement:

Need for Speed: Most Wanted is the name of two street Racing Games that are part the overall Need for Speed franchise published by Electronic Arts. The first Most Wanted was developed by then-main NFS developer EA Black Box and released on November 15, 2005 for Microsoft Windows, PlayStation 2, Nintendo GameCube, Xbox, and Xbox 360, the last of which had this game as one of its launch titles. It gained fame for being the first tuner culture game by EA that lets the player drive during daytime and to be chased by the police, as well as for its infamously cheesy storyline. There was also a PlayStation Portable release called 5-1-0. The second Most Wanted, a more socially-focused, much less story-driven reinterpretation of the 2005 game, was developed by Criterion Games. It was released on PlayStation 3 (with PlayStation Move support), Xbox 360note The only non-PC platform to have received both Most Wanted games, not counting the release of the 2005 game's PS2 version on PS3. (with Kinect voice support), Windows (mainly via the Origin service), and PlayStation Vita on October 30, 2012, with a Wii U version entitled Most Wanted U released in 2013. There was also a mobile version of that game developed by Firemonkeys Studios.

The main plot of the 2005 game involves the Player arriving in the city of Rockport with his blue and silver BMW M3 GTR (E46)note Which is also a rare racing version of the car! alongside Mia Townsend, in her own Mazda RX-8 Mazdaspeed. After a close encounter with Sergeant Nathan Cross, he runs into resident Jerkass Clarence "Razor" Callahan, who doesn't waste a second to insult the player. Mia tells him to simply race against the player to prove who's better, but Razor simply reminds her that he's Number 15 on the Blacklist, and thus the player cannot challenge him until he has a notable reputation. The player begins building a fame, meeting Rog on the way, and eventually manages to challenge Razor, who reminds him that the winner gets the loser's car. Needless to say, Razor cheated and tampered with your BMW's oil system, causing your car to malfunction and therefore lose the race. Finally, to rub salt into the wound, you're arrested by none other than Cross.

Later on, Mia comes to pick you up from the police station after you're released due to lack of evidence,note You don't have a car anymore, how could Cross prove that you're a street racer? but of course, not before Razor skyrockets to the top of the Blacklist with your car. However, you can get your first car and have a crack at defeating the Blacklist and evading the police. All you have are your skills, your Speedbreaker ability, your car, Rog, and Mia. You're going to need all that to beat the odds. It's you against the entire city, racers, police and civilians alike.

After rising through the ranks and finally beating Razor, you get back your BMW as a reward, then Mia reveals herself to be an undercover cop working for the Rockport Police Department and has the street racers under arrest, having used you as an Unwitting Pawn to help bring down the Blacklist. Feeling sorry for stabbing you in the back, she throws you the keys to your BMW (after taking them from Razor, who refused to do so), allowing you to escape from Cross trying to arrest you on-the-spot. However, he calls for the entire police force to come down on you at Heat Level 6, and soon you are swarmed with cops with nowhere to hide. A few minutes into the pursuit, Mia then calls you to escape the city by jumping over a Broken Bridge near the baseball stadium in Rosewood that has been closed off for the entire game. You thus race your car over to the road, jump over the gap, and leave Rockport for good. Cross has you listed on the FBI's Most Wanted list soon after, setting up a sequel. Indeed, the next game of the Need for Speed series, Need for Speed: Carbon, is an (almost) Immediate Sequel that follows the continued adventures of the player and Cross.

The 2005 game's setting of Rockport would be reused and modified in 2010's Need for Speed: World, along with Carbon's Palmont City.

The 2012 game's plot, on the other hand, is way more bare-bones by comparison. After a woman's voice welcomes you to the city of Fairhaven and tells you a bit about how things work there, you drive your Aston Martin V12 Vantage over Connors Bridge, past an inactive toll booth, through a pair of tunnels, and arrive in Downtown Fairhaven. Coming up to your first Jack Spot, you quickly switch over to a Porsche 911 Carrera S and have a duel with the Aston Martin that you just arrived in. After beating it (hopefully considering it's an easy race), the woman explains about mods, EasyDrive, Speed Points, billboards, speed cameras, smash gates, the police, and the Most Wanted List (this game's version of the Blacklist), you are then free to do whatever you want to go up the ranks to beat and earn the "Most Wanted" cars. Yeah, not much to work with really; Need for Speed: Most Wanted — A Criterion Game is really a Spiritual Successor to the also storyless and nonlinear Burnout Paradise. In fact, one could call it Burnout Paradise with licensed cars and police chases (it even has Takedowns).

The 2012 game's multiplayer mode plays differently in terms of progression and events. Cars are unlocked based on your SpeedLevel accumulated through Speed Points earned in all various main versions of the game in both single-player and multiplayer (rather than just finding cars at Jack Spots like in single-player), events are played though playlists of five events each, and public sessions are completely server-controlled, among other differences.

The PC version of the 2012 game was available for free from February 2016 to around mid-March 2016 through Origin's "On the House" program.

"I want every single trope after the guy":