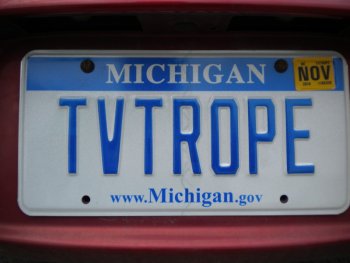 Gee, I wonder what your favorite website is.
Margie: Hey, Lou, did you hear the one about the guy who couldn't afford personalized plates, so he changed his name to J3L-2404?
Lou: Ya, that's a good one.
— Fargo
Advertisement:

In much of the world, one way national and local governments fund their public roads and highways is by charging an annual fee to every vehicle owner. The license plate which you see on every car is just proof that you've paid the fee, and the string of letters and numbers identifies each individual car. But one way to get a little more money is to offer, for a higher fee, the car owner the opportunity to customise that string of letters and numbers so that it reads something cool. This is the vanity plate.

It's a useful trope because it serves as a shorthand for the kind of character who would get one, usually someone with more money than sense and a lot of self-absorption. A Corrupt Corporate Executive might have one reading "BIG BOSS", a Jerk Jock might have "BEST QB", and a Rich Idiot With No Day Job might have "MY TOY". An obscenely rich character might have a number at the end to signify that he has more than one such car. Almost every Cool Car on TV has a vanity plate of some sort.

It's definitely a thing in real life, but it depends very much on where you are. In the United States, with its pervasive car culture, they tend to be easy to get and relatively cheap, and they're considered "mostly harmless" (if a mite gauche). California has one of the world's most famous car cultures and thus its most famous license plates, and for a period of time they even offered 8-character vanity license plates (more than basically anywhere else). Elsewhere in the world, though, license plates must follow a specific format, and vanity plates are either restricted to that format or not permitted at all. And even where it is allowed, it tends to be more expensive, so whoever owns a vanity plate is seen as an attention-seeking bore — compare how Americans treat vanity plates to how the British Top Gear hosts see them.

Also, on TV they tend to get away with more than you can in real life. Many vanity plates on TV have more characters than are allowed in real life, or they use invalid letter combinations that spell profanities that real life vehicle registration offices are all too experienced at catching.

See also Phone Word. Compare Bumper Sticker. Not to be confused with Vanity Plate, which is named after this but refers to something else entirely.

Note: When adding an example that's heavily abbreviated or requires netspeak to understand, please translate. The message may not be obvious to other readers.