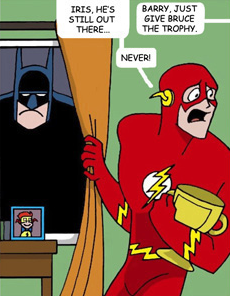 Yeah, Batman lost, fair and square.
Hobbes: Look, it's just a game.
Calvin: (after throwing a gigantic temper tantrum over losing a checkers game) I know. You should see me when I lose in real life!
— Calvin and Hobbes

There are many ways of taking a loss. Alice, for example, will admit defeat and might even compliment the one who bested them. Bob, however.... won't.

The Sore Loser is a character who takes defeat very ungraciously, no matter what kind of defeat it was. Unlike his graceful counterpart, Bob will get very snippy and bad-tempered, insult his opponent, accuse him of cheating, rant about his "superior skills" and, in some extreme cases, even try to physically assault his rival or kill him (Although sometimes they end up humiliated even further). Depending on the setting, he could do things like Flipping the Table, throw away the cards he was using, angrily swipe all the remaining pieces from the chessboard, and so on. In a fighting series, Bob will usually lose his calm behavior, resort to cheap tricks in order to win, adopt a more ruthless and brutal strategy, or unleash a Dangerous Forbidden Technique just to have a chance. Storming off in a huff is also an alternative. Many Dirty Cowards may also be this, as them losing usually means death in lethal situations.

Of course, if Bob's opponent Carol engages in Unsportsmanlike Gloating, she's basically giving Bob free license to react however he likes. The winner's reaction is a good way of telling who the sympathetic character is supposed to be in this exchange. That being said, the character engaging in Unsportsmanlike Gloating is often also the Sore Loser, ungracious in both victory and defeat.

This trope is often the launching pad for Villainous Breakdown, attempted "The Reason You Suck" Speech, and, in some extreme cases, One-Winged Angel. If I Can't Have You... could be considered as the romantic version of this trope. A person nervous about possible harm from winning against this type of person may decide to Let the Bully Win.

A Sister Trope to Second Place Is for Losers (and usually overlaps unless it's not the loser that thinks this), and Unsportsmanlike Gloating (being a sore winner).

Compare Rage Quit, Defiant to the End, Taking You with Me, Never My Fault, Post-Game Retaliation. Contrast Graceful Loser, Touché. If you were looking for a loser who frequently feels sore physically that's The Chew Toy.

Instead of accepting his defeat in his duel with SovietWomble, Cyanide ran away from it when on the brink of death and jumped off the map's cliff instead.

Instead of accepting his defeat in his duel with SovietWomble, Cyanide ran away from it when on the brink of death and jumped off the map's cliff instead.