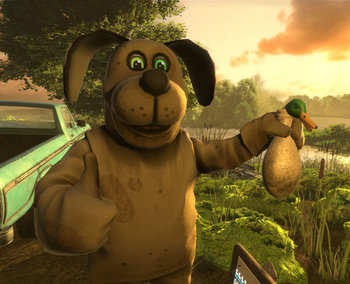 It's the eighties, and you're just a normal boy who is home after school. Then, your mother comes home with a rental copy of the newest hit game for your Gammon Kingbit Game System (totally not a trademark-friendly copy of the NES) - Duck Season! Finally, that light gun you've got is good for something. But your mom has to take it back tomorrow, so you'll have to make the most of your time. The game is immersive, fun, and you get to shoot that stupid dog in his stupid grinning face. However, as you play and the hours go by, weird things start happening... especially with the dog in the game.

So yes, it's another one of those games.

Duck Season is a VR game made by Stress Level Zero, a game studio headed by Brandon Laatsch, who's good friends with people from Corridor Digital and Freddie Wong. Though it's a throwback to classic '80s video games, especially a homage of Duck Hunt, it's also somewhat more than that - primarily a horror game, taking cues from the likes of Five Nights at Freddy's, but rather than relying on paranoia and jumpscares, this game prefers suspense, atmosphere and a lot of Mind Screw. As well, there are a grand total of seven endings depending on what you do.

Not to be confused with Duck Season, Rabbit Season.