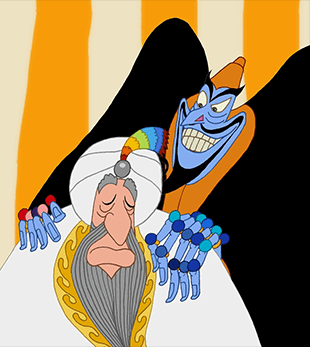 Blue skin and six-fingered hands are quite odd
When Zigzag is supposed to be as human as King Nod.
"There's lots of humans. There's my dad, Connie, Lars and Sadie, the mailman, Onion... I think."
— Steven, Steven Universe, "Marble Madness"
Advertisement:

It's no secret that all sorts of weird beings exist alongside humans. Stories in the fantasy genre, for instance, give us fairy-tale figures like dragons, witches and wizards, elves and dwarves, and whatever other oddities a specific author may come up with to give their world some personal flavor. On the Science Fiction side of things, we meet aliens, robots, artificial intelligences, freaks of nature and all manner of homunculi. No matter how wildly they vary from one another, and from one series to the next, however, they all have one thing in common: they're physically distinct from humans, even if it's not by much.

Every now and again, though, while exploring the Fantasy Kitchen Sink, you'll run into a character of indeterminable race or species. Sure, they seem human, what with their upright stance, human-like intelligence, and ability to speak, and yet there's just something about them that gives them away as something distinctly other. Maybe it's that they live in a series where no human can do the things they do, maybe it's that a certain part of their body (or even most of it) is kept conspicuously concealed or they explicitly have a visible part of their body that's unusual such as weird-coloured hair or Four-Fingered Hands (provided not everyone in the work looks like that), maybe they were clearly human at some point but something happened to them that may have made them undead/supernatural, or maybe it's that there just plain aren't any "other" humans around, raising suspicions. This person is Ambiguously Human. Fairly often, a series will go out of its way to avoid stating their out-and-out species, or they'll be called human or nonhuman in spite of their shared traits. If you can't figure out whether they spawned from the same end of the gene pool as you just by looking at them, though, they fit the bill.

Not to be confused with Rubber-Forehead Aliens, a trope more closely related to Special Effect Failure than to this. Or with Humans by Any Other Name, where it's clear enough that these are humans, only another term is used, to the exclusion of the word "human". Conversely, Our Humans Are Different is when you call a smeerp a human. Don't expect the writers of the work to explain just what the character is exactly supposed to be.

Considering his nature and the nature of the Bureau, it's hard to say whether Ahti is an extra-dimensional being or just a bit crazy.

Considering his nature and the nature of the Bureau, it's hard to say whether Ahti is an extra-dimensional being or just a bit crazy.