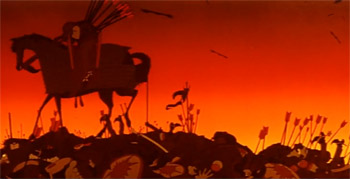 Can't blame him for leaving. That situation doesn't look healthy.

Then, there's the Red Filter of Doom.

Oddly enough, the best-case scenario with this is that the source of the red light is immediately apparent - say, the moon has turned blood-red, or there's a glowing doomsday device in the center of the room, or something nearby is on fire. If the only indication that it's a Red Filter of Doom is that it's not particularly romantic, there's just a general air of ominosity, or the fist-pumping action scene that was in regular saturation a few seconds ago has suddenly slowed and turned the color of blood, we can only issue a general warning to brace yourself.

open/close all folders
Anime
Film
Film - Animated
This trope is pretty common in animated film; below are just a few noteworthy examples.