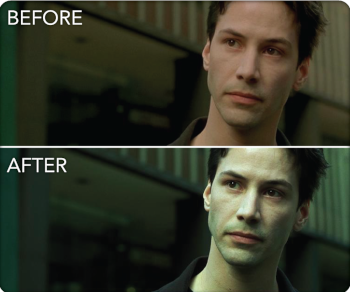 "So what are you trying to tell me?
There's a green filter everywhere?"
"Well, I hope you like the color blue, 'cause this movie sure does."
— Phelous, Pulse (2006) review

So the director/director of photography/production designer thought it would be a good idea to do something fancy to the colors, like saturating them so everything looks more vivid than normal. More often than not, this means making skin appear orange-y and everything else teal. Another example would be shifting the entire color palette, making (almost) everything appear a certain color. Color wash is usually done in post-production on "naturally" shot footage, but some directors use physical filters on the camera either as a stylistic choice or due to technical constraints of a particular shot.

Super-Trope to Warm Place, Warm Lighting, where this is used to denote a hot setting. Compare with tropes such as Real Is Brown, Unnaturally Blue Lighting, Deliberately Monochrome and Splash of Color. The difference between those tropes and Color Wash is that (a) the film uses both, or (b) uses another type of visual trick entirely, such as cranking up the saturation of the colors. See also Mood Lighting, Post Processing, and Color Contrast. Often used to signal a flashback. Orange/Blue Contrast is a common result.

Using lots of Color Wash can sometimes create a grating visual, but it can also be used to highlight important details or comment on a character's state of mind. Like any trope, it depends on execution.