Film / O Brother, Where Art Thou? 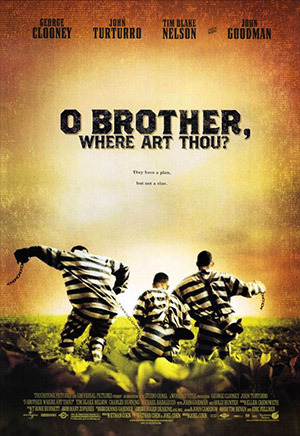 ♫ I am a man of constant sorrow,
I've seen trouble all my days...♫
"You seek a great fortune, you three who are now in chains. You will find a fortune, though it will not be the one you seek. But first... first you must travel a long and difficult road, a road fraught with peril. Mm-hmm. You shall see thangs, wonderful to tell..."
—The Blind Railman
Advertisement:

O Brother, Where Art Thou? is a 2000 comedy film written and directed by The Coen Brothers, (very) loosely based on Homer's The Odyssey.

The story follows three escaped prisoners in Depression-era Mississippi — Ulysses Everett McGill (George Clooney), Delmar O'Donnell (Tim Blake Nelson), and Pete Hogwallop (John Turturro). After fleeing the chain gang, they embark on a rollicking adventure in an attempt to reach a huge stash of money that Ulysses buried in his backyard. They have only a short time to do this, though, as the backyard in question is in an area slated to be flooded by the Tennessee Valley Authority to build a reservoir.

On their journey they meet, among others, a blind prophet, sirens, a Cyclops, and a gifted black guitarist who "sold his soul to the devil". In their attempts to evade the authorities and reach the money, they wind up recording a hit song, robbing a bank with George "Baby Face" Nelson, encountering the KKK, and inadvertently getting mixed up in the state gubernatorial election. And on top of all that, Ulysses must grapple with the prospect of reuniting with his lover and their children...

It was noted for the tremendous success of its soundtrack, most of which was recorded by Alison Krauss & Union Station and other country-bluegrass acts (Dan Tyminski provided Everett's singing voice).

Bonus points if you recognize the title from Preston Sturges' 1941 film Sullivan's Travels.

O Brother, Where Art Thou? provides examples of: