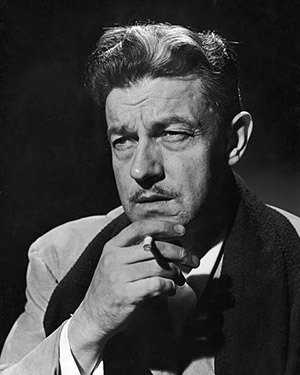 "Unless television gets into the hands of the same real estate men and candy butchers who inherited sound film from the movies, it will discharge the obligation that talking film failed to do and will diffuse to the smallest hamlets in the furthest part of the world the treasures of literature and of music."
Advertisement:

He was the first person to use the "written and directed by" credit (for The Great McGinty, which won him the first Academy Award for Best Original Screenplay), and the first successful Hollywood studio screenwriter who was allowed to direct his own scripts, paving the way for other writer-directors like John Huston and Billy Wilder.

His mother was very friendly with the dancer Isadora Duncan, even giving her the long silk scarf that would soon break her neck, and had an affair with none other than Aleister Crowley (though Preston was not his son).

An actress whom he was dating in the late '20s revealed to him that she was only in the relationship for research purposes—she was writing a play, and to her (said she), he was "as a guinea pig is to a scientist." Not long after that, his first produced play, The Guinea Pig, opened on Broadway in 1929.

Sturges' output at the beginning of The '40s was especially prolific; he wrote Remember the Night, wrote and directed McGinty, Christmas in July, and The Lady Eve, and opened a restaurant in 1940, then won an Oscar for McGinty and wrote and directed Sullivan's Travels and The Palm Beach Story in 1941, all before Pearl Harbor was attacked.

However, his departure from Paramount proved a setback that his career never recovered from: The Sin of Harold Diddlebock, his first independent picture, was a sequel to The Freshman (1925) and meant to be an attempted comeback vehicle for Harold Lloyd, but creative differences between the two men led to an uneven finished product and Lloyd retreating deeper into retirement. Following the subsequent box-office failure of Unfaithfully Yours, Sturges spent the last decade of his life mostly unemployed.

Sturges holds a celebrated reputation among film historians for both his comedic and dramatic work; John Lasseter and former Simpsons writer John Swartzwelder are noteworthy fans.

And, no, he wasn't related to fellow director John Sturges, although both men were natives of the Chicago area.

Works by Preston Sturges with their own trope pages include: