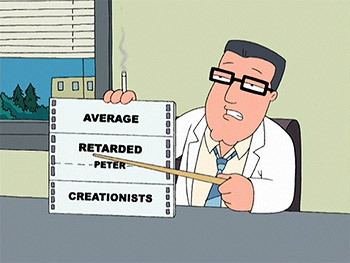 "So, as you can see, you are just over the line of mental retardation."
"Along comes Jesus with this wonderful, moralistic philosophy, about why we should be tolerant and understanding of our fellow human beings, and then we spend the next two thousand years killing one another, because we can't quite agree on how he said it."
— Interview with the Monty Python team
Advertisement:

When a work of fiction is insistent on the differences between religious idealism and the demands of the plot, overly religious characters may be portrayed as out of touch with the world around them.

May lead to Ideological Rock–Paper–Scissors if religion, magic, and science coexist in the same universe and are out to get one another.

Compare If Jesus, Then Aliens, No Such Thing as Space Jesus, Outgrown Such Silly Superstitions, Lawful Stupid, Chaotic Stupid, and many versions of the Corrupt Church. Contrast God Guise, in which the effect is quaint or humorous rather than abrasive, Clap Your Hands If You Believe, where belief actually alters reality, and Flat-Earth Atheist, where disbelief makes you stupid. Likely to be a Strawman Political. Probably takes the Enlightenment side of Romanticism Versus Enlightenment. Use of this trope isn't always, but can be, a sign of an Author Tract especially if it's overused. If the belief is actually true, expect reinforcing action from a Celestial Bureaucracy. The polar opposite is Hollywood Atheist.

As with other strawman tropes, Belief Makes You Stupid is a commentary of Real Life attitudes crafted to suit the purposes of various authors; by definition, real religious people are not examples and each religion should be assessed on its full history, teachings and merits rather than tarring some or all with the same brush. The fact that there are a Vocal Minority of religious people in Real Life, depending on the religion, who exhibit these characteristics does not mean that you should assume that those characteristics apply to every religious person that you meet or every follower of a particular religion.