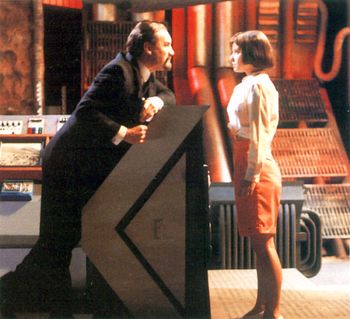 The one with a bite-sized Master.

Written by Peter Grimwade. This four-episode serial first aired from February 23 to March 2, 1984.

Our story begins with a group of desert dwellers on the planet Sarn. They worship a god named Logar and they have a Chosen One, named Malkon, who is declared so because of a special double-triangle symbol burned into his arm. The people of Sarn like to bicker on if their god really exists or not, and continue to do little else for the rest of the story.

In the TARDIS, the Doctor hasn't taken Tegan's decision to leave all that well. He curses the Daleks for a bit before Turlough tells him to snap out of it. However, before either of them can get any more lines in, a random scream pierces the TARDIS control room. Why, that must be Kamelion, and he's in danger! You remember Kamelion, right? He showed up at the tail end of the last season and vowed he'd be a loyal companion of the Doctor! ...And then he never bothered to show up again until this episode.

It turns out Kamelion is lying on the ground sparking as a cable stretches into a wall of the TARDIS set. But the Doctor isn't especially worried, as he just leaves the guy laying there on the ground.

Over on Earth, the same double-triangle is mysteriously found engraved on what looks like an ancient golden dumbbell on the island of Lanzarote in the Canary Islands. It's found by an American archaeologist and his stepdaughter: college student Perpugilliam "Peri" Brown. Peri wants to go off on holiday to Morocco instead with some guys she's just met, but her stepfather refuses and leaves her stranded on the boat alone, because he's a terrible person. Peri, being of completely sound mind and judgement of course, decides to take the rather huge artefact with her as she leaps off the boat they've been travelling on and tries to swim to shore. Of course, she nearly drowns.

Luckily, the TARDIS is right nearby. Apparently, the magical alien dumbbell is sending out a distress call of some sort. Turlough just happens to see the drowning Peri and decides to save her, only to go through Peri's belongings once he gets her into the TARDIS. Smooth. Either way, Turlough finds the golden dumbbell of the ancients and is shocked by the double-triangle, as he has the exact same symbol burned onto his arm. The Doctor, for his part of this episode, was off having tea while waiting for another bit of the signal. Once he comes back, the Doctor sets off for the source of the signal — taking everyone to the planet Sarn. The Doctor and Turlough go out to look around.

Peri is immediately jumped by Kamelion, who has now taken the shape of... Peri's... step... father. Because Kamelion, being influenced by psychic projections, has apparently picked up on some strong negative emotions Peri has towards the man. Soon enough, though, Kamelion turns into the Master instead. The robot made to be a slave to the Master is now again a slave to the Master. No one seems very surprised by this.

The Doctor and Turlough find the Sarn people and the Doctor quickly informs them that they live in an active volcano system. Not only that, but they happen to be living inside lava tubes and vent chambers. Before much more happens, though, Turlough asks about that double-triangle symbol through showing it off on his arm. They praise him as a second Chosen One, and Turlough realizes that Malkon may well be his brother. And then Peri shows up, having run out of the TARDIS to flee from the incredibly-creepy Kamelion to let Turlough know that someone called "the Master" has just shown up.

Kamelion (still looking like, and controlled by, the Master) shows up and promptly takes over the role of "the Outsider" in the local religion, which basically means he gets to run around and tell people what to do. As silly as this seems on paper, in action it just means that Anthony Ainley gets to be awesomely hammy — throwing his arms around like a preacher on Christmas morning. The Doctor starts acting like a complete and utter asshole to Kamelion, claiming he's trying to free the distressed droid. Then the Doctor is thrown in jail.

It turns out that Sarn is an old colonization attempt by Turlough's people, and it just so happened to be a prison world. Turlough is also a criminal-by-relation, his father having fought in a war, and having ended up on the losing side. Meanwhile, Peri is taken to the Master's TARDIS by Kamelion and she's forced into moving a small box. Looking inside the Master's "control box," she quickly sees why the Master needed Kamelion... he's doll-sized. So he runs around his TARDIS while Peri tries to crush him like one would an errant cockroach.

Apparently, he accidentally shot himself with an advanced Tissue Compression Eliminator and needs some special regenerating gasses from the planet Sarn in order to return to normal. However, the gasses are stored in the core of the planet, and the Master's dinking around has caused the place to become geologically unstable. Turlough swallows what little pride he has left and calls his people with the wreckage of a crashed spaceship, where his brother also happened to come from. They agree to send a ship to recover those who remain on the planet. Meanwhile, Peri and the Doctor try to stop the Master's super awesome plan... but not before the Doctor decides to use the regenerating gasses to heal up a few of the sick and wounded by setting them on fire.

However, Peri and the Doctor aren't really able to stop the Master. Instead, the Doctor is just barely able to short-circuit Kamelion, giving the robot what the Doctor calls "an electronic heart attack." Kamelion then, in what amounts to Hulk-speak, begs for the Doctor to kill him off. Using the Master's Tissue Compression Eliminator, the Doctor coolly ends Kamelion's life, reducing him to a silver action figure. Meanwhile, the Mini-Master is finally absorbing the regenerative gasses of the planet, and grows back to size...

...until the blue flames that represent the gasses turn to real flames and burn the Master to death as the Doctor stares on in Dull Surprise.

With the Master supposedly dead (again), the Doctor and Turlough part ways. The war "criminals" have long since been forgiven and Turlough's exile is lifted. Peri begs to follow the Doctor along on more adventures. and he agrees, hesitantly, and welcomes her to the TARDIS.