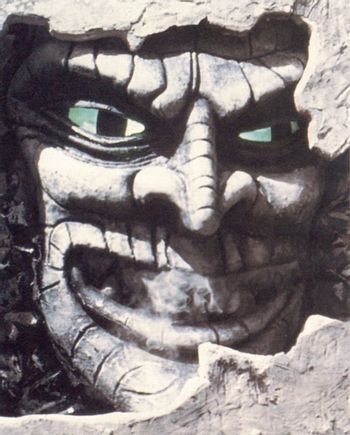 Hey. Hey you, c'mere and gimme a hug.
Turlough: We're running out of places to run.
Tegan: It's the story of our lives.
Advertisement:

The one written by a potato crisp.

After their traumatic encounter with the Silurians and Sea Devils, the TARDIS crew aim to spend a restful time visiting Tegan's grandfather in his little English village. What Could Possibly Go Wrong? (Stop sniggering at the back.)

Well, something's gone very wrong with the local historical reenactment event. Little Hodcombe's local squirearchy, Sir George Hutchinson and his friends, have come under some malign influence. The reenactment suddenly involves real violence, people staggering about with Mind-Control Eyes, and projections from the 17th Century (including muddy urchin Will). And on top of all that, Tegan's grandfather has gone missing.

After initially leading Tegan and Turlough into the village in the manner of a worn-down parent with two squabbling kids, the Doctor gets the picture, and sends the companions back to the TARDIS so that he can conduct a "scientific investigation" while they stay safe. Instead, they find that the Malus is already inside the TARDIS, so they go to tell the Doctor and get in trouble. Tegan finds herself unwillingly crowned as Queen of the May, while Turlough gets locked in with Tegan's grandfather after being snuck up on by a man in a suit of armour whose resemblance to the knight with the rubber chicken out of Monty Python's Flying Circus is bound to be totally accidental.

Meanwhile, the Doctor, Will and local plucky schoolteacher Jane Hampden discover the source of the trouble inside the local church: it is, of course, all caused by the Malus, an evil time-travelling alien war machine feeding on psychic energy. Can the Doctor, the schoolteacher, the urchin, and the companions, plus Tegan's granddad, save the day? Will Tegan go quietly? Will there be tea? Yes.