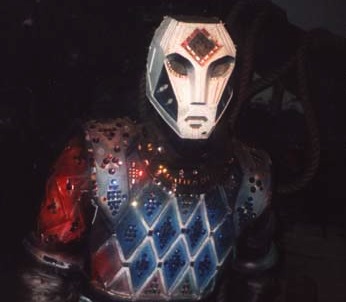 It's like KISS collaborated with Elton John on the design!
"You call yourself a Time Lord? A broken clock keeps better time than you do! At least it's accurate twice a day... which is more than you ever are!"
—Tegan
Advertisement:

The Doctor lands the TARDIS at exactly the right spot to drop Tegan off at her job, and even has her there a bit early... 315 years early to be exact.

It's 1666, and they're in a rather deserted bit of English countryside. There they meet lovable rogue Richard Mace, an actor-turned-highwayman with an interesting grasp of situational ethics (breaking and entering: bad; stealing: fine), but fortunately the Doctor and company are around to teach him their own superior ethics (breaking and entering: fine; stealing: bad).

In walks the glammest android ever seen in Doctor Who, and laser blasts start firing. Tegan and Adric are taken away for interrogation. The Doctor, Nyssa, and—reluctantly—Richard explore the woods and discover... a shipping container. That is, it looks like a shipping container, but the soundtrack has a synthgasm when Richard points it out, so it's probably something important. Like a spaceship!

One of the former occupants of the spaceship is a Terileptil fugitive. He interrogates Tegan and Adric about the Doctor. The Doctor and the others plan how to deal with the android: A sonic booster set up in the TARDIS might just deal with it. As they leave the ship, a group of villagers, all wearing the same device Mace found, approach them. They demand the Doctor come with them. When he refuses, they attack. The three run back into the ship, now under siege by the villagers. The Doctor blasts open the rear hatch of the ship and the group escapes into the forest to find the TARDIS. The controlled villagers follow them at a distance.

Back in the manor, Tegan and Adric have been placed in a locked room. Nyssa heads back to the TARDIS to work on the sonic booster. The Doctor and Mace go to take a horse from a nearby mill to make their way back to the manor. Tegan and Adric escape from the room and go into the manor proper. Adric jumps out a window before Tegan is recaptured by the android. Just before leaving the mill, the Doctor and Mace are confronted by real villagers and are about to be killed for being "plague carriers".

Minutes later, the android, in the guise of the Grim Reaper, bursts into the mill, frightens off the villagers and takes the Doctor and Mace back to the manor. They find Tegan under the bracelet's control. The Doctor encounters the Terileptil and his offer to take him away from Earth fails. The Terileptil plans to kill everyone on Earth and take over the planet. Mace is also equipped with a bracelet and the Doctor is thrown in a room where the Terileptil incinerates his sonic screwdriver.

It would be fourteen years until we see the sonic screwdriver again.

The Terileptil brings in a cage with a rat and explains his plan: he will use genetically enhanced plague carried on the rats to devastate the population. The Terileptil leaves the room and the controlled Tegan prepares to open the cage.

The Doctor disables the bracelets and stop both of them. The Terileptil leaves for his base in the nearby city and sends the android to take control of the TARDIS. The Doctor, Tegan and Mace escape from the room and search the Terileptil's lab. It is empty. Mace tells the Doctor that the nearby city the Terileptil referred to is London. The android arrives at the TARDIS but is dealt with by the sonic booster Nyssa finished. Adric and Nyssa move the TARDIS to meet the Doctor and the others at the manor.

Using the TARDIS scanner, the Doctor locates the Terileptil in London. The TARDIS rematerialises there and the five enter the building. With the Terileptil leader are two other Terileptils who get the jump on the Doctor and Mace. They stop them, but one of the Terileptil's weapons overloads and detonates. The explosion destroys the building and starts a raging fire. Mace stays behind to fight the blaze as the Doctor, Tegan, and Nyssa leave in the TARDIS.

The fire is at Pudding Lane, where the Great Fire of London started. Which makes it the second time the Doctor accidentally caused one of the great fires of history.

This serial marks the Doctor Who debut of Eric Saward, who had also just become the series' new script editor. (Though since the season was shot Out of Order, he was credited onscreen as early as "Castrovalva", shot later.)

It also sees the destruction of the Doctor's sonic screwdriver, its last appearance until the TV Movie in 1996. Producer John Nathan-Turner liked to claim it was too much of a convenience for the Doctor, much like K9 was when he was around. Cynics over the years have pointed out that it really just let writers pad out the runtime again by having the Doctor be foiled by simple locked doors, and many writers ended up introducing various one-off gadgets that served the same narrative purpose as the screwdriver had.