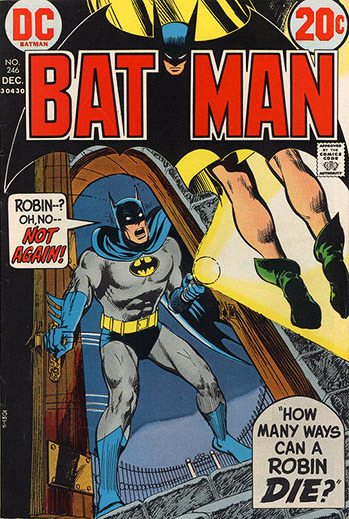 Strictly speaking this is supposed to be dramatic,
but you know...
Red: We've got a complaint, sir. A guest found a pan-dimensional hellhound in their soup!
Monkey: Again?
— League of Super Evil
Advertisement:

A simple comedy dialogue trick is to have something bizarre happen, and then have someone say "not again", implying it's happened before. The actual phrasing can vary. A slightly less funny version (unless done just right) is where it actually has happened before, on-screen, and the character is just pointing that out.

A variation is to have the character say something along the lines of "This is just like X all over again," where X is something typically ordinary, such as prom, or graduation.

See also This Is Gonna Suck, which can be combined with it. Is often used in conjunction with the Noodle Incident (especially if what happened the last time hasn't been mentioned or seen before, particularly if the "This is just like X all over again" variation is used). Contrast with Here We Go Again!, which is used to end a story with a repeating motif. Also contrast I'm Not Doing That Again and We Are Not Going Through That Again, in which the character refuses to repeat something that happened before.

Related to Didn't We Use This Joke Already?

He's lucky to be alive. Twice.

A Yakuza wakashu finds himself lucky to be alive twice.

Alternative Title(s): Not This Shit Again, Not Again

He's lucky to be alive. Twice.

A Yakuza wakashu finds himself lucky to be alive twice.