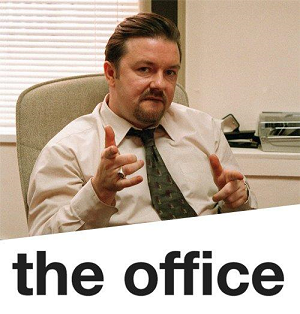 "The people you work with are just people you were thrown together with."
— Tim Canterbury
Advertisement:

British Mockumentary Work Com (2001-2003) in the style of a fly on the wall, created by Ricky Gervais and Stephen Merchant.

The main setting is the administrative office for the Slough branch of paper supplies company Wernham Hogg, presided over by Unsympathetic Comedy Protagonist David Brent (Gervais). His Number Two, Gareth Keenan (Mackenzie Crook), is an unpleasant, pathetic loser with a military obsession. The most sympathetic character is Tim Canterbury (Martin Freeman), the witty clerk whose friendship with receptionist Dawn Tinsley (Lucy Davis) borders on the romantic. The series was met with great critical acclaim and won several awards, hailed for its original style and subtle, insightful humour.

The series is a mockumentary: the characters are very aware of the cameras being on them, all the time. Brent in particular is given to preening and showing off for the camera, and Gareth explicitly notes that he's only behaving a certain way because "they're filming".

Has a follow-up film that specifically follows Gervais' character, David Brent: Life on the Road.