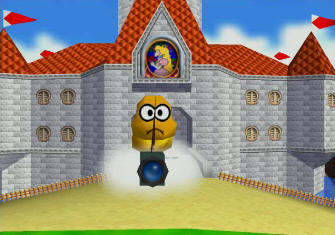 There to record Mario's adventure.
Advertisement:

In most movies, shows, video games, etc., the camera is assumed to not be actually present; one might say it exists outside the Fourth Wall.

An In-Universe Camera, as the name suggests, is actually present in the "world" of the story: Characters may notice and talk to it, it may get bumped or shaken by the environment, and may even be seen in a reflection. This frequently makes it a target for Camera Abuse, and works rather well with a Jitter Cam.

It's also a favorite device of the Documentary Episode, where another character is assigned a role of operating the camera, or a Mockumentary, which parodies the documentary genre. May lead to a Left It In situation, if a character explicity asks for something to be "edited out" (but it's, of course, left in, since you the viewer are watching it).

When the camera is meant to represent the "eyes" of a character, it's a P.O.V. Cam. If the cameraman is an amateur and the plot is about what happened to them, it's a Found Footage Film.

See also Show Within a Show. For a gameplay mechanic that frequently uses this trope, see First-Person Snapshooter.