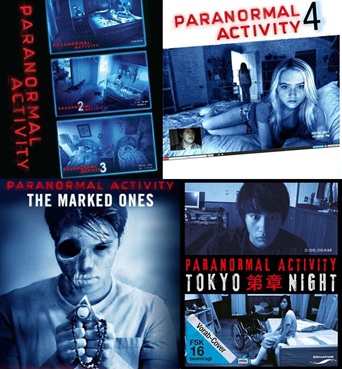 Paranormal Activity is a supernatural found footage horror film series that began in 2007 and has grown into one of the most well-known series of the found footage subgenre.

The first film chronicles a woman named Katie who's spent most of her life haunted by a supernatural presence, the efforts of her and her boyfriend Micah to set up a video camera to discover what it is, and the paranormal activity that ensues — with dire consequences.

It was filmed in a week for $15,000 and had a modest festival run, after which it was given a Steven Spielberg-approved limited theatrical release in late 2009 and — thanks to an effective fan-driven marketing campaign — given a wider release a month later. It has since made over $193 million, making it — number verifiability and possible exclusion of marketing costs aside — the single most profitable film ever made.

This gave way to a full franchise, with numerous sequels (almost all prequels) centering around Katie's childhood, the origins of her haunting and her connections to similarly haunted family members. The only two entries in the franchise that don't feature Katie are The Marked Ones, featuring an entirely new set of Latin-American characters, and Next of Kin. There was also a Japanese-exclusive sequel to the original film, Paranormal Activity 2: Tokyo Night, released about a month after the American sequel; it follows a completely new story but is not considered canon.

This page contains heavy spoilers and tropes for all seven films.

As a series, these films provide examples of:

Paranormal Activity: The Marked Ones

Tropes applying to Paranormal Activity: The Marked Ones: