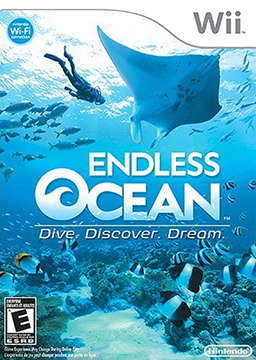 Endless Ocean is a Wide-Open Sandbox Adventure Game mixed with a scuba diving sim by Arika, which simulates a series of scuba dives on an incredibly diverse coral reef. It became legendary for completely eschewing combat of any kind.

You, the player character, are a professional diver assigned as a "marine correspondent" to the fictional South Pacific island of Manoa Lai (Manaurai in the European release). This job generally involves looking at a lot of fish, and finding out information about them. The only character you actually get to interact with is your marine biologist assistant, Katherine. Along the way, you discover ancient ruins, caves, deep waters, and lots of Misplaced Wildlife (though they at least made them all real fish).

There's a sequel entitled Endless Ocean 2: Adventures of the Deep (known as Blue World in the US), which allows players to choose from several dive spots around the world instead of being limited to a fictional South Pacific Ocean, including the arctic and antarctic and a section in the Amazon River. Dangerous animals can now actually attack the player, requiring the divers to make a quick escape or use equipment to pacify them before becoming alligator caiman, piranha, or shark food.

Not to be confused with The Infinite Ocean, a fairly creepy point-and-click adventure game about the first Artificial Intelligence. Compare ABZÛ for the PlayStation 4 and Steam.