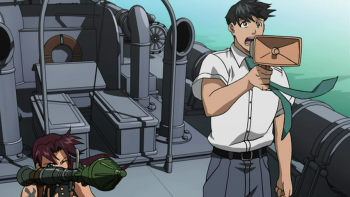 Negotiation comes in handy even when rocket launchers are involved.
Advertisement:

To become a hero, one has to train their body and mind so that it can think and act quickly in a life or death situation. They might enroll in a local dojo to learn martial arts or study psychology in order to better understand the human mind. However, there are times when the hero's best training can come from their day job. Being practitioner in a certain field makes it easy for a writer to establish a vital skill a character may possess that will prove useful. This may happen particularly if they're pulled Out of Job, Into the Plot.

Like its sister trope Chekhov's Hobby, Workplace Acquired Abilities is about skills acquired as part of a character's backstory. Compare Wax On, Wax Off, when mundane activities or chores are used as a training means. Contrast Chekhov's Skill which applies only to skills the hero is shown learning, and Mundane Utility and Martial Arts and Crafts, when exotic job skills are used to do very mundane things. For times when characters train in sports and apply their athletic abilities in combat situations see I Know Madden Kombat. Also look toward I Know Mortal Kombat for situations related to video games.