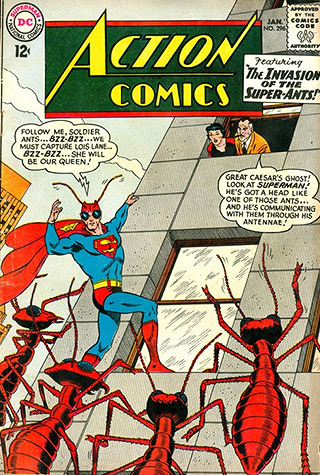 Giant bugs. They are bugs or muppets or Serkis Folk, whichever, but all are mad creepy. They have no individuality or intelligence, except possibly a Hive Mind. Considering almost all variants are hostile towards humans, and every single one of them is really ugly, nobody really worries too much about the morality of killing them.

While these creatures are very widespread and can be encountered in many different places, the trackless depths of the Hungry Jungle, the barren wastes of the Standard Post-Apocalyptic Setting and the unearthly landscapes of alien worlds are among their most common nesting grounds.

This often overlaps with Atrocious Arthropods, as Big Creepy Crawlies are often depicted as hideous and dangerous beings. See also Scary Scorpions, Creepy Centipedes, Creepy Cockroach, Bee Afraid, Wicked Wasps, Moth Menace, and Bug War. If they are from space, they're Insectoid Aliens. If they have a lust for galactic domination, they are a Horde of Alien Locusts. A subset of Attack of the 50-Foot Whatever and Dire Beast. These are especially common in prehistoric settings. Videogames (and Kaiju) seem to love combining this trope and Macabre Moth Motif. Some of them are also Proportionately Ponderous Parasites. Often led by a queen.

To some extent, this was once Truth in Television, back in the Carboniferous Period, but only possible due to higher oxygen levels at the time. Such animals lack lungs and breathe, at best, via trachea stuck in the abdomen wrapped in carapace. So ones that get too big can't absorb enough oxygen to survive, and those that get a lot of trachea (centipedes) constantly risk dehydration. The Square-Cube Law also holds them down. These restrictions are downplayed underwater, however.