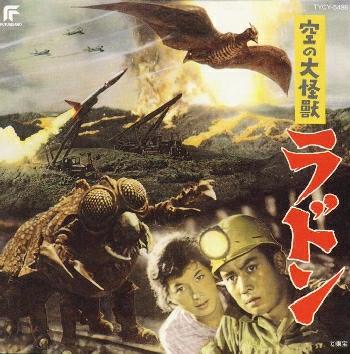 Classic Kaiju film directed by Ishir⁠ō Honda, who knows a little more about Kaiju films than you do, pal, because he invented them! This page is primarily based on the dub by the King Brothers.
Advertisement:

The movie takes place on one of the smaller islands of Japan. A small mining operation is in a panic; the mine's deepest vein has flooded, and one of the miners was found horribly mutilated. The blame falls upon Goro, the last person the dead miner was seen with. Goro's friend Shigeru, determined to prove Goro innocent, discovers that the killings were actually done by prehistoric insects. Shigeru leads a group of soldiers into the mine, where they battle the monsters. When bullets prove ineffective, Shigeru kills the bugs with a booby-trapped mine cart. With the monsters that did the killing dead, the movie's over, right?

As the cart explodes, the mine shaft collapses, trapping Shigeru inside. Meanwhile, a nearby volcano has become active, endangering the village, and to make matters worse, UFOs flying at supersonic speeds have been sighted all over the world, attacking jets and carrying off a young couple visiting the mountain. Meanwhile, Shigeru has been found outside the mine, badly hurt and suffering from a total loss of memory. Weeks go by, the UFOs are sighted some more times, and Shigeru's memory slowly returns. When his fiance Kiyo shows him that eggs her pet birds laid are hatching, Shigeru suddenly remembers what happened to him.

As it turns out, when he got trapped in the mine, Shigeru fell into the nest of the killer insects. Inside this nest was an egg, which promptly hatched, revealing a giant flying reptile, which ate the remaining bugs before taking off. A scientist who hears Shigeru's story and examines all the collected evidence about the mystery of the UFO, realizes that the monster and the UFO are one and the same, a mutated descendant of Pteranodon called Rodan. Army guys show up, and discover that Rodan is living in the volcano, and what's more, it's not alone. A second, female Rodan flies out of the mountain, and joins her mate in leading the military in a chase across Japan, finally landing in and leveling Fukuoka.

After the attack, when the Rodans have gone back to the volcano, the military comes up with a final, desperate plan to defeat the monsters. The plan: Set off the volcano, with the Rodans still inside. As the mining village is being evacuated, Shigeru finds Kiyo near the volcano, and tells her that he loves her, and that they should probably get out of the way of the volcano. Not a moment too soon, either, because as they leave, the army moves in. Bombers attack the Rodans' nest, and ground-launched missiles set off the volcano. When the Rodans fly out of the erupting volcano, all hope seems lost when, suddenly, one of the reptiles succumbs to the volcanic fumes. As the military, Shigeru, and Kiyo look on, the male Rodan flies into the eruption, choosing to die rather than be separated from his mate. As Shigeru ponders the implications of such actions in supposedly "vicious" monsters, he wonders whether he could ever make such a sacrifice for Kiyo, and we fade to black.

It's basically Gojira with two Kaiju.

Ever since his debut in this film, Rodan has become a frequent part of the Godzilla franchise, having appeared in many films alongside the Big G. He's usually portrayed as an ally of Goji out of sheer convenience, and as such doesn't have as much of a friendly interaction with The King of the Monsters as other kaiju like Anguirus. Easily recognizable on his own, the big, angry pterosaur has successfully cemented his place as one of the most iconic kaiju from Japanese pop cultue.