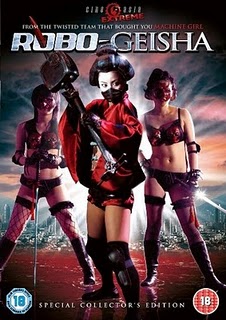 RoboGeisha is a Japanese splatter-horror/action/comedy film directed by Noboru Iguchi. It stars Aya Higuchi as Yoshie, Hitomi Hasebe as Kikuyakko, and Takumi Saito as Hikaru Kageno. Originally released in Japanese theatres in 2009, it was later licensed for distribution in English by Funimation. See James Rolfe review it here

RoboGeisha is the story of two sisters: Kikuyakko "Kikue" Kagusa, a Geisha who is renowned for her beauty, and Yoshie Kagusa, who works as a servant in the same teahouse as Kikuyakko. Yoshie suffers near constant abuse at the hands of her elder sister, who derides her lack of grace and potential for becoming a Geisha at every opportunity. While Yoshie for the most part tries to take this treatment in stride, at times her rage boils over and manifests itself in almost-superhuman feats of strength.

Their lives change when the young heir of the Kageno Steel Manufacturing corporation notices one of these feats, and forces the sisters to become part of his private army of geisha assassins. Accepting their fate, the sisters quickly rise through the ranks of the geisha corps, constantly replacing their human flesh with ever more deadly and bizarre mechanical body-parts and weaponry, each hoping to out-do the other in their ongoing rivalry.

However, when Yoshie is given the order to eliminate the family members of the other girls that have been kidnapped and forced into servitude by the corporation, she has a change of heart. Vowing to bring down the company and its cadre of cybernetically enhanced assassins once and for all, she puts her nearly unmatched skills in the arts of death-dealing to use in an effort to avenge the lives the corporation has taken in its mad rise to power. This decision puts Yoshie on a path that will inevitably lead to a final confrontation with her now more-machine-than-human sister, and to uncovering the secrets of the men who have been pulling their strings all along.