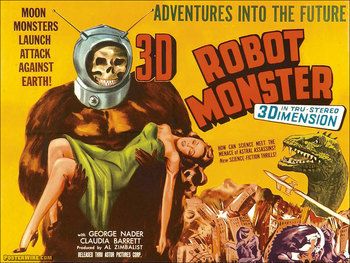 We know you are trying not to laugh.
"I cannot - yet I must. How do you calculate that? At what point on the graph do 'must' and 'cannot' meet? Yet I must - but I cannot!"
— Ro-Man XJ2
Advertisement:

A 1953 B-Movie, released in 3D, by Phil Tucker, Robot Monster is one of the most famous So Bad, It's Good sci-fi films ever made. Simply put, it is about a family having a picnic in California and meeting an evil alien invader: the nefarious Ro-Man, who has used a special Death Ray to destroy all humans. But the family survived by taking a special serum invented by their scientist dad.

Using his amazing advanced galaxy-conquering technology — you can tell, because it emits soap bubbles at moments of high drama — Ro-Man must find a way around their defenses. The kicker is the Big Guy's also struggling with unforeseen human desires... oh, did we mention the scientist's nubile daughter? Not to mention her hunky lab assistant boyfriend, annoying younger brother and... Yeah, you figured? OK then.

So far, so run-of-the-mill. It could even be argued that hey, as compared to, say, Manos, this thing has an actual plot (though not a good one), also a soundtrack involving the onscreen actors speaking in their own voices. But no other classic bad movie can boast of Ro-Man

◊, the titular "Robot Monster". Quoth the film's then-twentysomething auteur, recalling the inspiration (and, not incidentally, budget) behind his lead character:

"...I talked to several people that I knew who had robot suits, but it was just out of the way, money-wise. I thought, ‘Okay, I know George Barrows.’... When they needed a gorilla in a picture they called George, because he owned his own suit... I thought, ‘I know George will work for me for nothing. I’ll get a diving helmet, put it on him, and it’ll work!’"

In his book, On Writing, Stephen King recalls seeing the movie as a kid, and says that he felt it was "art of quite a high nature"note In King's other non-fiction essay book, Danse Macabre, King provides an account of the first time he saw the movie while high and "almost laughed [himself] into a hernia.". It was also John Carpenter's favourite film when he was a child.