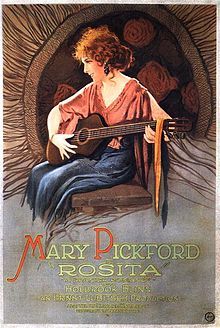 Rosita is a 1923 silent film starring Mary Pickford and directed by Ernst Lubitsch.

Based on the 1879 French opera Don César de Bazan, Rosita takes place in 19th century Spain. A king (Holbrook Blinn) becomes enamored by a pretty young street singer named "Rosita" (Mary Pickford). Despite Rosita's satirical songs against him the king isn't offended. If anything, he finds it provocative. He has Rosita arrested for attacking the king, so that the king can get to know her better in private. When a nobleman named "Don Diego" (George Walsh) tries to help her, he ends up arrested as well. The two end up falling in love while jailed. Jealous, the king condemns Diego to death in order to keep him from Rosita. At this same time, the king sends Rosita off to a villa in hopes of seducing her. Rosita is unimpressed by the king but is pressured into giving into his advances in order to help her family out of poverty.

Rosita's family still feels disrespected even at the villa. Her mother demands she have a noble husband, to which the king suggests Diego. The king's recommendation is more than meets the eye, as he plans on killing Diego after the wedding. Diego is forced into participating by the offer of being shot instead of hanged. Neither Rosita or Diego know who they're marrying. At the wedding, they are married with their eyes covered. The king's plan fails when Rosita decides to take a peek at her husband.

Diego ends up arrested. Rosita is unable to convince the king to let her husband free. When Rosita hears that Diego has been executed, she flies into a rage and attempts to kill the king herself. Fortunately, Diego survived and he is reunited with Rosita. The king's wife (Irene Rich) knows about his affair with Rosita. Furious, the queen had ordered Diego spared.

Rosita came to be because Mary Pickford was sick of being type-casted as cute children in films. She wanted an adult role that wasn't The Ingenue for once. Pickford originally wanted to do an adaptation of the 1902 novel Dorothy Vernon of Haddon Hall but Ernst Lubitsch backed out at the last minute. They then decided to do Faust but Mary Pickford's mother nixed the idea when she heard about the infamous baby killing scene. As a result, Pickford and Lubitsch ended up adapting Don César de Bazan.

Rosita was a huge success and earned over a million dollars. Despite this, Mary Pickford hated the film. She ordered all the prints destroyed and refused to hand Rosita over for film preservation. Thankfully, a (presumably bootleg) print was saved and thus the film still exists for future audiences pleasure.