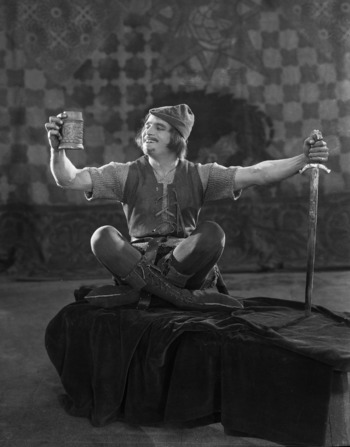 Robin Hood (1922) is one of many, many adaptations of the Robin Hood mythos. This film was directed by Allan Dwan and starred Douglas Fairbanks as Robin Hood.

Robin Hood starts out as Robert, the Earl of Huntington and a loyal lieutenant to Richard I of England, the Lionheart. Scheming Prince John is plotting to seize his brother's throne, with Sir Guy of Gisborne as his evil sidekick, and Maid Marian as Robin's loyal girlfriend.

King Richard goes off on a Crusade with Robin as one of his right-hand men. While he is away, Prince John embarks on a cruel, despotic rule of England. Maid Marian sends a desperate plea to Robin for help, but Sir Guy, also on crusade with Robin and the King, has plans to stop Robert. And plans to get rid of Richard as well.