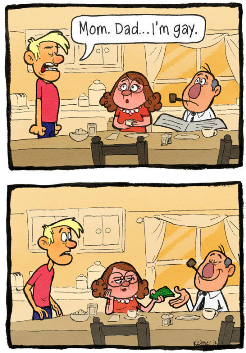 Knew I should have bet on January.
Source: Ryan Kramer

Rat: It just ends! It's the edge of the world!
Jin: (to Li) Pay up. It's flat.
— Sinbad: Legend of the Seven Seas
Advertisement:

The Reveal is the ultimate resolution of big mysteries, the wool is finally pulled from the eyes of the audience and the truth is displayed for all to see. This should come as a huge shock to everyone... except the people who saw it coming. This doesn't only apply to viewers: characters sometimes suspect what's coming too, and sometimes they decide to make it interesting. After the big revelation, be prepared for a cutaway to two characters exchanging money. Not only had they foreseen the possibility that the revelation might be coming up, they decided to make a game of whether or not it did.

Classic setups include someone coming out of the closet or the resolution of a Will They or Won't They?. Classic subversions include compromising situations that imply one of the above or the losing character immediately winning the money back due to a second revelation.

Sometimes we see the bet being made, in which case a sufficiently-delayed payoff can count as a Brick Joke. Other times, we only get the punchline. A common variation is for the bet to be a contest, with the characters discussing how long the reveal took before handing over the money (in this case, the implication is that no one was betting that Bob wouldn't come out — they only disagreed how long he'd last).

Contrast The Bet, which is usually a more integral part of the plot (though a particularly devious character might set a Side Bet on themselves losing The Bet).