Fanfic / Only The Results 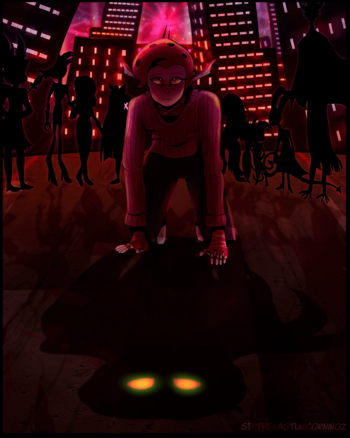 Nice kid like him, redemption will be no trouble at all! Art by TheLastUnicornInOz

Many things can damn a soul, be it willful malice or mere circumstance, everyone in Hell earned their spot in the afterlife. Moonchild is a gentle soul beset by monsters on all sides languishing in an afterlife not of his own making. One day, he meets the Princess of Hell and is sent down a road of self-discovery that could have lasting repercussions for the Infernal Plane.

is a Fusion Fic of Hazbin Hotel, Helluva Boss and JoJo's Bizarre Adventure by WriteAnon, the third in a series that began with A Peaceful Afterlife and continued in Helluva Job.

The story follows Doppio after his death in Vento Aureo, as he finds himself coping with being in Hell despite not having done much (directly) to merit being there. Between the "demands" of his boss' wife, the kind of vicious passengers he runs into on the commute between home and work, and the general fact that Hell is, well, Hell, Doppio - or, as he's known here, Moonchild - would really like a change in scenery.

Naturally, when he runs into Charlie, the proprietor of the Happy Hotel, Moonchild eagerly jumps at the chance for redemption, even though such a course could lead to tension with Stolas, who wouldn't necessarily be happy to lose his best secretary to the daughter of Lucifer.

However, between the fallout of a recent theft in the mortal plane caused by Stolas' favorite imps, and the rising presence of something dark and familiar in Moonchild's mind, all parties involved might soon have bigger problems to worry about...

Only the Results contains examples of: