Film / Back to the Future Part II 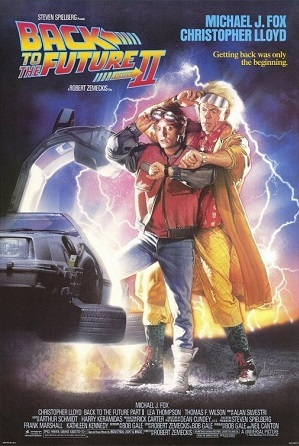 Marty McFly: You're not gonna believe this, we gotta go back to 1955!
Doc Brown: I don't believe it!

Picking up from the first movie, Doc Brown takes Marty and his girlfriend Jennifer to 2015 in an attempt to save his identical son from trouble. While successful in their plan, a series of complications involving a sports almanac from the future leads to the elderly Biff Tannen stealing their DeLorean and making his young self rich, altering the present (i.e., 1985) into a dystopia where he is an all-powerful billionaire. Now Marty and Doc have to return to the 1955 school dance from the first movie and Set Right What Once Went Wrong, whilst remaining unseen lest he cause a Time Paradox. But fixing the time-stream and getting home won't be easy...

Back to the Future Part II provides examples of: